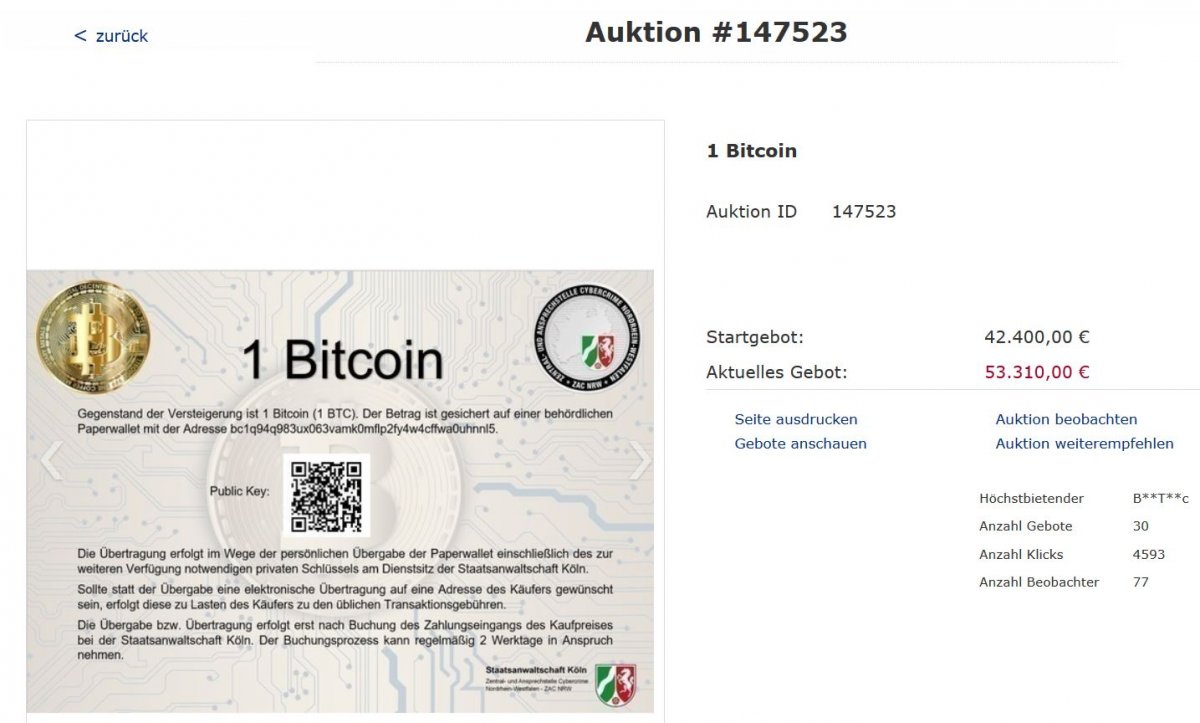 The German judiciary achieved a price far above market value in the auction of seized assets in the crypto currency Bitcoin on the Justiz-Auktion.de portal. The first Bitcoin was auctioned on Wednesday after two days of auction for 57,010 euros. The NRW Ministry of Justice announced this on Wednesday upon request. Meanwhile, the rate of the currency had fallen from just under 54,000 euros on Monday to 50,900 euros on Wednesday lunchtime.

In the afternoon, a package of ten Bitcoin went under the hammer for 522,500 euros. The highest bid came shortly before the end. This was also well above the current market value, which had further decreased to 50,700 euros per Bitcoin.

“The interest was huge”

In total, the cryptocurrency auctions involve 215 Bitcoin, most of which come from revenues from darknet drug dealers. They had been discovered and secured from the criminals. North Rhine-Westphalia operates the nationwide only, central online auction portal of the German judiciary.

“We are extremely satisfied with the way the auctions have gone so far,” said a spokesman for the Cybercrime Central Office at the Cologne public prosecutor’s office. “The interest was huge and we have a lot of new registrations on our auction platform.” Auctions for a total of 16.5 Bitcoin expired on Wednesday.

The public prosecutors could only speculate about why the bid was higher than the market value: “Maybe because you know that you can get the goods from us,” a judge spokeswoman said. The 215 Bitcoin will now be auctioned off one by one. The proceeds go to the state treasury.

The auction, which started on Monday, had been in preparation for months. The auctioned Bitcoins are then handed over either in the form of an official paper wallet, which you have to pick up from the public prosecutor in Cologne – or by Bitcoin transaction, whereby the transaction fees are borne by the buyer. A paper wallet is a paper form for a Bitcoin address and the associated private key.

The North Rhine-Westphalian judiciary is hoarding a small fortune from crypto currencies. She not only owns Bitcoin, but also Litecoin, Ethereum, Ripple and Monero.