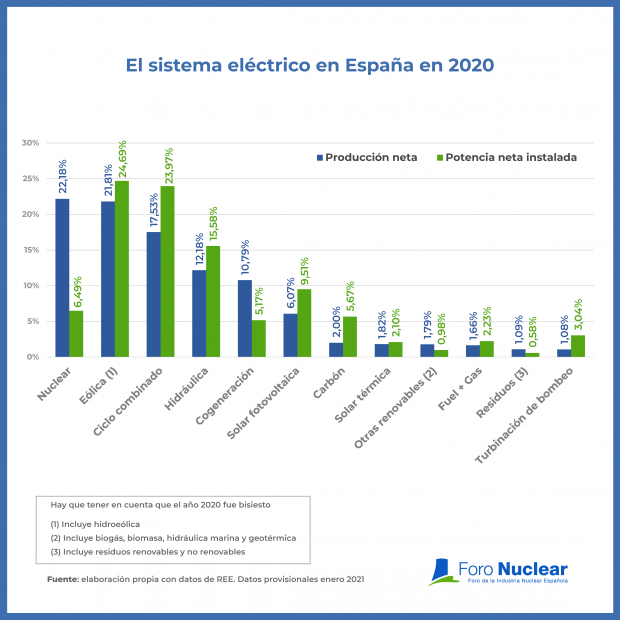 The electricity price continues to set records since July and, in this context, it seems that nuclear energy could be a solution to achieve a reduction in the electricity bill. However, the Government continues to tax the few nuclear power plants that exist in Spain.

In this sense, the Spanish Nuclear Industry Forum has rejected the draft Law that acts on the remuneration of CO2 not emitted from the electricity market and considers that “this draft Law should not be applied to nuclear energy” and that in the terms in which it is proposed, together with the excessive current tax burden, «it would lead to the cessation of the activity of the entire nuclear park.

Currently, in Spain there are seven operational nuclear reactors: Almaraz I and II, Ascó I and II, Cofrentes, Trillo and Vandellós II. These generated during the past year more than a fifth of the electricity consumed. In 2020, Spanish nuclear power plants have managed to produce 55,761.9 GWh. With this figure, nuclear energy was once again besieged as the technology that has contributed the highest net production to the Spanish electricity system, with the 22.18% of the total. According to data from Red Eléctrica de España (REE), nuclear energy has been leading energy production in Spain for 10 consecutive years, specifically since 2011. In addition, it has also been “the one that has avoided the most polluting emissions”, they say from the Nuclear Forum.

Nuclear power has also been the technology that has operated the longest hours, despite the fact that throughout 2020 there have been four refueling stops in Almaraz I, Ascó I and II and Trillo – longer than usual, taking into account the strict health security measures due to Covid-19 -.

With reference, therefore, to the operating factor, the Spanish nuclear park has operated on average the 89.81% of the total hours of the year (7,835 hours out of 8,784 hours of the year, since 2020 was a leap); a figure above other technologies, as seen in the graph at the end of this news.

Ignacio Araluce, president of the Forum of the Spanish Nuclear Industry, considers that “this leadership reflects the essential service that nuclear energy provides as a base technology, reliable and stable and, in addition, free of CO2. A technology associated with a competitive sector, highly qualified, at the forefront and internationally recognized, in which thousands of people work to offer electricity safely, constantly and as well foundedl, even more, in the difficult moments that we are having to live ”.

“The only alternative would be gas”

According to sources from the nuclear power plant of Almaraz, “the nuclear energy is the cheapest, it is also safe and reliable. However, one of the drawbacks we have is that it cannot be switched on and off quickly compared to others such as gas or hydropower. ‘

However, they assure that these others also have “cons”. The closure of all nuclear power plants in Spain is scheduled for 2035 and it will be impossible to produce the large amount of energy generated by nuclear power plants; thus “the only comparable alternative would be gas, but this option is much more expensive than nuclear energy”, comment the sources.
Centrals in other countries

In the European Union, 14 of the 27 Member States have central nuclear. There is a total of 110 active reactors, which annually produce about 26% of the total electricity consumed in the EU as a whole. Four other reactors are under construction in countries such as Slovakia, Finland and France.