Official documents: how long the confidentiality agreement with Pfizer lasts and why the Cuban vaccines duplicates it 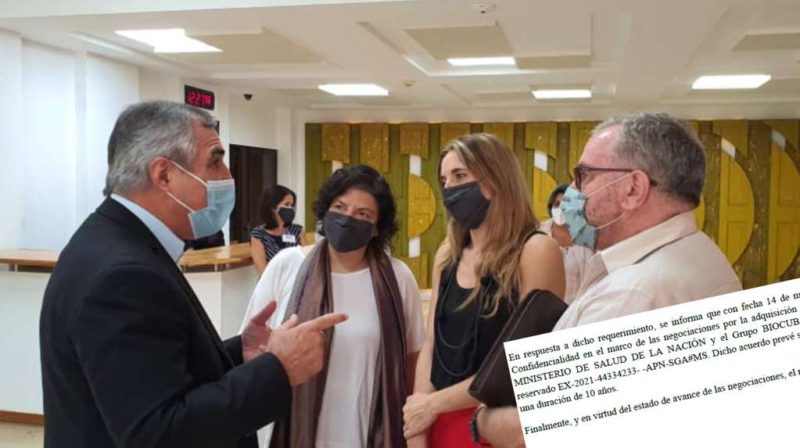 A common feature of the negotiations for coronavirus vaccines is that the party interested in acquiring the doses must sign confidentiality clauses before closing the contract. This was the case with the Russian Direct Investment Fund, the company AstraZeneca UK Limited, the SInopharm laboratory and with each and every one of the companies with which the Argentine Government sealed purchase agreements.

// The secret of vaccines: what are the confidentiality clauses signed by the Government and how many years do they last?

Negotiations with Pfizer and with the laboratory BioCubaFarma -which develops the Cuban vaccines Abdala and Soberana- were not exempt from this condition. With the North American laboratory, the Ministry of Health of the Nation signed a confidentiality agreement for five years, while the informative veil on the agreement with the Cuban company will last for a decade, as could you know TN.com.ar through a request for access to public information.

The extension in time of the confidentiality clauses is not a minor fact since it protects issues related to the dose delivery schedule, technical and technological information on vaccines and content of negotiations, among other issues. By way of example, the Government refuses to provide what was the forecast of shipments of serum by Russia and AstraZeneca, both of which were not fulfilled. The delays of these companies affected the vaccination campaign during the first months of the year when the batches arrived in the country in dropouts.

According to information accessed by this medium, the confidentiality agreement between the Ministry of Health of the Nation and the Pfizer laboratory signed on July 2, 2020 and it is valid for five years. “Its scope is linked to all information presented, regardless of form or mode, that is related to the business or business plans of the parties ”, indicated from the area led by Mauricio Monsalvo, the Vizzotti official in charge of the vaccine negotiations.

// The explanation of the laboratories in Deputies is delayed: why don’t the vaccines arrive?

It is this confidentiality that prevented for long months from having accurate information about the reasons why the parties did not reach an agreement for vaccines. In fact, the former minister Ginés González García spoke of “almost unacceptable conditions” which he was unable to detail due to this clause. The veil began to be broken with the presentation before the Lower House of the general manager of the company for Argentina Nicolás Vaquer. There he confirmed that the pharmaceutical company had offered the Casa Rosada 13.2 million serums, of which 8,000,000 could be delivered by the first half of 2021. To know the fine print of the contract, you must wait until July 2, 2025.

If there were other offers or counter offers in the medium, they are protected by confidentiality and requests for access to public information cannot break that lock that protects valuable documentation for the parties. Pfizer’s is a sensitive contract for the Casa Rosada since the opposition considers that a deal could have been closed in 2020, which would have guaranteed a supply of doses for the first months of the year.

A decade of confidentiality

On May 28, the Minister of Health of the Nation Carla Vizzotti and the presidential advisor Cecilia Niolini visited the facilities of the BioCubaFarma company, which researches and develops vaccines Abdala, Sovereign Y Mambisa. There they were received by the president of the company, Eduardo Martínez Díaz, with whom they discussed the scientific progress of these sera.

// Agreement with Pfizer: the Government is working on a special operation to bring vaccines to the country and on a new transfer protocol to preserve them

Just days before the trip to Cuba, the Ministry of Health of the Nation and BioCubaFarma had sealed a confidentiality agreement for a period of ten years. It took place on May 14. This Cuban laboratory is the one that develops the serum called Abdala, which according to that Center for Engineering and Biotechnology showed an efficacy of 92.2% in three doses during the third phase of trials.

The technology and composition of the vaccine are matters protected by these clauses. The serum is still in full stage of clinical trials although it has already begun to be used in Cuba and Venezuela itself. In fact, the Venezuelan Society of Infectology (SVI) warned about the inappropriate use of the Abdala, Soberana 2 and EpicVacCorona sera.

“We should note that Abdala, Soberana 2 and EpicVacCorona are currently considered vaccine candidates. Until now they have not published their results in peer-reviewed scientific journals ”, they stated.

These days, the Center for State Control of the Quality of Medicines of Cuba and the ANMAT exchange information regarding vaccine development. The round trip of information is carried out as a result of a framework agreement for scientific-technical cooperation related to research, technical assistance, teaching and training, communication and any other activity aimed at promoting joint actions held in 2008 by both organizations.

The confidentiality of the rest of the vaccines

What aspects does confidentiality protect?

Why the Government Refuses to Deliver the Contracts

Despite several requests for access to information made by this means to try to find contracts signed for vaccines, the Ministry of Health of the Nation rejected the requests on the grounds that the vaccine law (27.573) empowered the National Executive Power to include confidentiality clauses or agreements in contracts according to the international vaccine market.

The Government responded that “making the required contract available to the applicant would imply the violation of the confidentiality clause that makes up the same,” which would represent a breach by the National State. And they added: “In this way, committing not only the international responsibility of the State, but also the provision of vaccines would be seriously jeopardized”.

// One hundred flights to the US, India, South Korea and other countries in search of vaccines and supplies: the logistics planned by the Government to cushion the impact of the Delta variant

Among other issues, the Health portfolio claims that if the contract is delivered, the supply of vaccines could be affected and the conclusion of future agreements would be impaired.

“In short, while recognizing the principle by which the acts of the Government are presumed public, it is noted that there are various interests at stake, among which those linked to the right to health and life of all the inhabitants of the Nation ”, they concluded.