On the way to 100 TB hard drives: graphene layer for magnetic disks 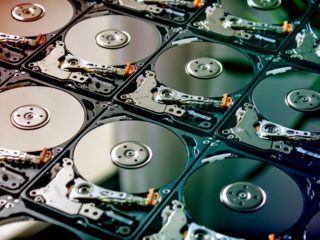 A new material for coating magnetic disks could help to increase the storage capacity of hard drives in the future. A research team from the University of Cambridge tested how a wafer-thin coating of graphene on platters behaves and came to the conclusion that the combination with other techniques such as Heat Assisted Magnetic Recording (HAMR) could lead to a tenfold increase in the storage density. HDDs with a capacity of more than 100 TB are conceivable.

The coating of the magnetic disks serves, among other things, to protect against mechanical damage. So far, carbon with a thickness of 2.5 to 3 nanometers has typically been used. Graphene reduces the layer to around 1 nm, the research team writes in its own paper.

Since the read and write head comes closer to the magnetic disk, a higher magnetic field strength is achieved and magnetically more stable material can be written on. As a result, fewer magnetic particles are sufficient, which means that the recording density can be increased if the rest of the technology is used.

Graphene is said to be well suited for combination with energy-based recording techniques such as HAMR. Before writing, the magnetic particles are heated up to just below their Curie temperature of around 450 ° C by a laser integrated in the write head. This reduces the magnetic field strength required for writing and thus the required size of the write heads – the bits can continue to shrink.

Bit-Patterned Magnetic Recording (BPMR), which forces the bits with non-magnetic depressions into islands a few nanometers in size, provides an even higher storage density. A combination of the technologies should enable storage densities of 10 terabits per square inch – the magnetic disks of today’s hard drives are a tenth.

The research team has already tested HDDs with graphene coating in the laboratory and roughly describes a possible production process. However, it usually takes years for such innovations to find their way into series products.