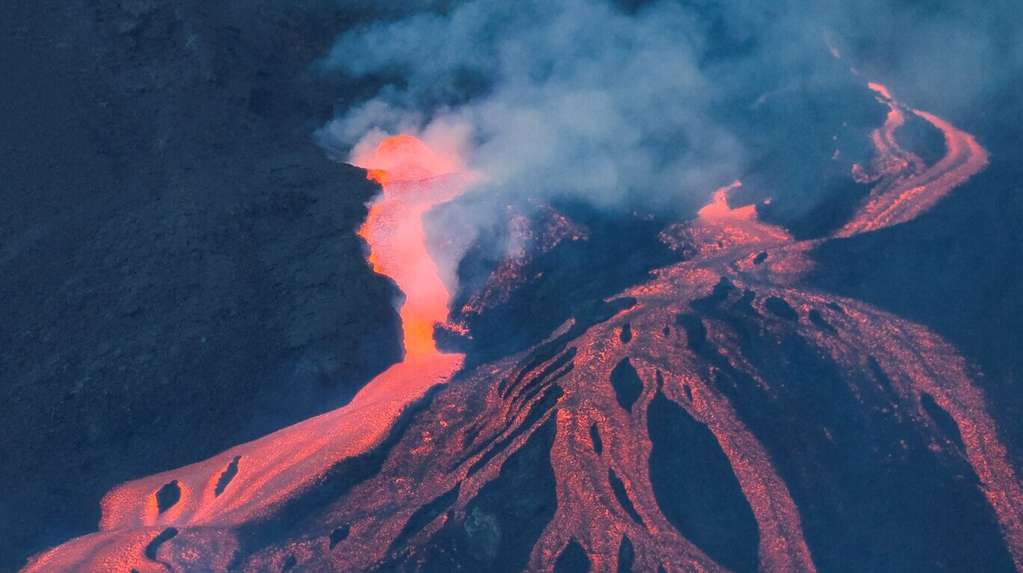 One month after the eruption, the La Palma volcano continues to emanate lava: How is the island?

A month after it erupted, the volcano Cumbre Vieja on the island of La Palma still shows no signs of weakness. From its different emission centers it continues to emanate lava which pushes the fronts of the north wash towards the sea. On the west of the island, there are parts that are covered by a black mantle, the molten rock that has begun to cool, at least its most superficial ones. The main front of the north colada is about to make its arrival at the sea, but it advances very slowly because the contribution of lava is getting thicker so it cannot be determined when it will finally reach the water.

The damage caused by the La Palma volcano

What worries the authorities is that of all the contribution of lava that it receives from the different mouths of the volcano it could reach bury some areas that had not yet been affected. It is for example the case of the neighborhood of the lagoon, where one of these fronts began to enter in the previous days. Currently, until this Friday, the authorities reported that they had stopped their advance into the urban area.

However, it is feared that in the next few hours or days it will again receive force from the lava and continue like this. gobbling up buildings and houses in its path. In case that happens, they fear that it could run down the slope and end up affecting some of the neighborhoods that were evacuated in recent days.

The ravages in recent times have been many. 845 hectares of land have been totally buried and it has generated a population emergency since until today they have specified evacuate more than 16,000 residents of the island. Many of them have been able to go to second homes or to apartments that family or friends lent them, but there are a few who have not had as many possibilities, as in the case of Jose who lives with his family in a motorhome.

“We lost seven propertiesI, my father, the winery, my brother’s house, my uncle’s house, my cousin’s house and the woman’s company, a clothing store that was what they lived with, ”says the survivor.

He lived in the motorhome for 12 days, a total of six people, but not all of them enter. “We have been through a lot like many people, I have friends who have lost everything, it is difficult, it hurts me. I would not like to leave here, my island. This is very strong for everyone, it is quite an impressive crisis ”.

Alfonso Escalero, the photographer known for taking the image of “the house of the miracle” that was saved from being engulfed by lava on its destructive journey, has been working there since the volcano erupted. He collaborated generating content at a scientific level, taking images with drones that also helped neighbors identify whether their houses were still standing or not. In dialogue with Phenomena, on TN He told how his working days have been on the island.

“Very ugly things are happening, the volcano is destroying everything. This has to stop to be able to give a little oxygen and organize better because it’s a monster “, he sentenced.

Escalero said that a day’s work on the island is “A lot of stress”. At the beginning there was not so much rigidity in the controls, because not even the institutions themselves knew what they were dealing with. Before they had a free way to approach where they wanted. When the volcano evolved, priority had to be given to the military, the Army, the Civil Guard and then companies like yours that were helping with scientific content. But now it is much more difficult, there are specific hours when they can fly in certain places and at a specific height and distance. Escalero considered that although it is difficult, it is much more organized.

Regarding the rescue of animals on the island, Escalero considered that a reconnaissance should be carried out, because in many houses there must be animals, cats and dogs that have managed to escape from the lava but are there. “It is a pity that a special team has come to rescue these dogs and that as someone was ahead of them they left when they had the materials to request permits to rescue the rest of the animals,” he said in relation to the news of some dogs that they were seen trapped in the last days, but that when a special team prepared to rescue them they were no longer there.

It should be noted that in the area the rescues cannot be done with helicopters because there is a lot of ash. 20 drones have already fallen due to the ash entering the engines, and the same could happen with helicopters.

Rescue of animals surrounded by lava from the La Palma volcano

A few days ago some drones visualized some trapped dogs by lava in a pond. They wanted to rescue them but now they are missing and instead they found a banner that reads: “Fuerza La Palma. The dogs are fine. ” Apparently, some hunters friends of the owner of the dogs could be the authors of the banner. What is striking is that the dogs were isolated, surrounded by cold lava, in a place of difficult access and it is not allowed to enter any part of the island without permission.

At the Advanced Command Post, the pilots of the drones members of the Comprehensive Animal Service of the Canary Islands and agents of the Civil Guard were reviewing the latest images that were recorded in the area where they were supposed to be trapped by dogs. In the days before, they had fed the dogs with a drone and had even rehearsed a rescue, but before the operation was allowed, someone else rescued the dogs and now everyone is wondering where they are.