Ortega reappears to justify his hunt against opponents: “We are trying criminals” 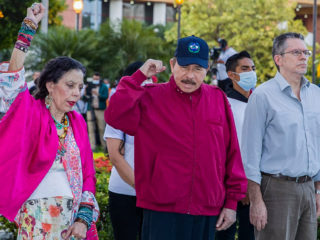 Daniel Ortega has reappeared this Wednesday afternoon, after a month and five days of public absence, to justify with a fiery harangue his repressive crusade in Nicaragua against presidential candidates, opposition leaders, businessmen and journalists, which adds up to twenty people detained. “We are not judging candidates, here criminals are being judged who have attacked the security of the country, the lives of citizens […] They want to organize another April 18, another coup to provoke what they call regime change, ”said the president in a radical tone, referring to the citizen rebellion of 2018, when thousands of Nicaraguans demanded in the streets of the country the end of term.

Ortega had not commented on the repressive escalation that the police and the Nicaraguan Prosecutor’s Office carry out together, and has taken advantage of the commemoration of the birth of one of the founders of the Sandinista Front, Carlos Fonseca, to make it clear that his persecutory stance is radical, regardless of the broad national and international condemnation, especially on podiums such as the United Nations, the Organization of American States (OAS), the European Union and countries such as the United States that have redoubled sanctions against a government that is already clearly described as “dictatorship ”.

“Everything we are doing is in accordance with the law, with the codes established to investigate, prosecute and prosecute those who have committed crimes against the homeland, money laundering, as is done with drug traffickers. There is not a step back; There won’t be a step back! ”Ortega threatened.

The questioned president refers to the investigation of alleged money laundering and the accusations based on law 1055, known as the law of “sovereignty of the people”, which have sent five opposition candidates to jail, cleaning the ballot at once election of the most serious contenders for Ortega. Among those detained and under criminal investigation are Félix Maradiaga, Juan Sebastián Chamorro, Arturo Cruz, Miguel Mora and Cristiana Chamorro, daughter of former President Violeta Barrios de Chamorro, and the most popular of all applicants according to polls.

Ortega has not recognized the condition of presidential candidates of the five prisoners, and instead insisted on qualifying them as “criminals.” “How many millions (of dollars) came in to sow death in 2018 and see how many millions stayed! There it goes coming out. That they do not come to say that they are candidates, because there are no registered candidates here. Not even they (opposition) had a single candidate. Not even when they were reunited at the embassy could they join. The embassies were in full swing. The Yankee and others. So, on account of what is said in the media of the global right that pre-candidates are being detained? Criminals are being tried here, ”Ortega said, referring to a divided opposition that was close to reaching a consensus on a single candidate to face the Sandinista leader in the general elections.

Under the discretionary indictment of “treason against the fatherland” for “inciting interference and international sanctions”, the former former guerrillas Dora María Téllez, Hugo Torres, Víctor Hugo Tinoco, opposition leaders and the banker Luis Rivas Anduray are also prosecuted. At the same time, the investigation carried out by the Prosecutor’s Office for alleged money laundering is being expanded every day against businessmen from the Nicaraguan Foundation for Economic and Social Development (Funides) and journalists. This Tuesday it was learned that the influential journalist Carlos Fernando Chamorro left Nicaragua “to preserve his freedom” after the police raided his home.

“We are fighting the battles that we have to fight. If the police find someone stealing a bicycle or a cell phone, the police have to arrest him, even if he is a thief from a very poor family (…) And that principle applies to everyone. Here it is not a question that the person who has more cannot be touched by the Prosecutor’s Office, cannot be touched by the police, cannot go to court, go to prison … Why? Because he belongs to high society and is also an agent, an employee of the Yankee empire? They conspire against the country, they conspire to overthrow the Government. And that is not new. We already saw it in action in 2018 ”, stated Ortega.

This repressive escalation that began more than three weeks ago – and to which political analysts in Managua find no rationality – has beheaded the political leaders who stood out during the social protests of 2018. The international community has been forceful in its condemnation of the drift Ortega’s repression, but the Sandinista president was defiant.

“The enemies of the (Sandinista) revolution are shouting there. How poor [los opositores]; how is it possible that they are imprisoned, how is it possible that they are prosecuted … and they launch campaigns against Nicaragua, “said Ortega, who is seeking a repeat mandate in the elections scheduled for November. “Some countries dare to attack Nicaragua when they have a completely glass roof, also a glass floor. They are on their knees asking for sanctions before the Yankee empire, they think that with sanctions they will subdue Nicaragua ”, he added. Ortega has resorted to his typical comparisons to justify his repressive actions. “Instead of being with that absurdity, sending us to tell us to set them free, that the United States free the 400 they have prisoners for attacking Congress [capitolio en Washington]… And here they are screaming for twenty ”, the president has settled.