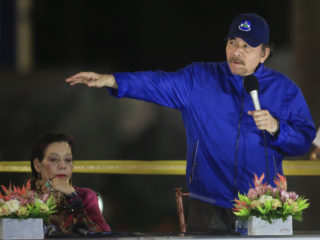 The words of the late Commander Tomás Borge, a dark and feared figure in the Sandinista revolution in Nicaragua, seem today to come from a dark prophecy. Daniel Ortega had just installed himself back in power in 2007, when Borge declared: “Anything can happen here, unless the Sandinista Front loses power … whatever the cost.” And the cost has been high, with a scorched earth political strategy, in which the former Sandinista guerrilla born from the fight against the Somoza dictatorship is willing to eliminate any adversary or silence all kinds of dissent. Ortega has been installed in repression and political persecution to maintain power in the Central American country, through control of the justice apparatus, efficient in raising cases against opponents; the instrumentalization of the National Assembly, at its command to pass laws that criminalize criticism and, above all, its dominance over the National Police, the repressive organ of the regime. “Eliminating all candidacies, all opposition, is the objective of a dictatorship in agony. That is why it resorts to massive repression. Nothing has worked for him, ”said Dora María Téllez, a former Sandinista guerrilla, Ortega’s former comrade in arms and today a critical voice from the opposition, detained on Sunday in Managua.

It is not that Ortega played under the rules of democracy when he returned to the presidency after almost two decades as an opposition candidate in Nicaragua and lost three consecutive elections (against Violeta Chamorro in 1990, Arnoldo Alemán in 1996 and Enrique Bolaños in 2001), On the contrary, it began a strategy to dismantle the already fragile Nicaraguan institutional framework, supported in part by the millionaire oil cooperation that came from the Venezuela of Hugo Chávez, used to intimidate the independent press, buy media, silence critical voices. and develop a clientelist policy to maintain the favor of the poorest, under its motto “up the poor of the world.”

His first strategy was against journalism, implemented by his wife Rosario Murillo, now his vice president. The government controlled radio and television licenses, exerted economic pressure against newspapers, through taxes and other taxes or by blocking the delivery of the paper at customs. Then came the shock groups, fanatical hordes financed by the Sandinista Front, to intimidate opponents and burst demonstrations, with special emphasis on a start against women, who bravely stood up to the new regime. And as of 2008, with the municipal elections of that year, electoral fraud arrived to expand its territorial political power and guarantee control of the entire election apparatus. Taking advantage of a weak opposition, divided and without legitimacy in front of the electorate; Of the little interest that Nicaragua generated internationally and of a strategic alliance with businessmen, who allowed the Sandinista’s excesses in exchange for doing juicy businesses, Ortega was building his autocracy, but without paying attention to what would become the stone that he would put in Check his project: a nascent middle class demanding more rights.

The coup was not expected and it came in the spring of 2018. Ortega imposed social security reforms that affected pensions and that were rejected by employers, because they imposed the employer to pay higher fees. The first demonstrations were timid, but violently exploded by the shock groups. The images of retirees bleeding from the beating generated a national outrage that turned into massive protests, demanding the end of the regime. One of those first protests, which drew tens of thousands of Nicaraguans, was financed by businessmen, in a direct affront to Ortega. Stunned by the citizen rebellion and the international interest it aroused, the Government decided to resort to violence. The initial response came from Ortega’s wife, Rosario Murillo, who gave the foul order to her subordinates: “Let’s go with everything.” The police, the shock groups and a para-police force equipped with weapons of war, imposed terror in the cities, attacked demonstrations and dismantled barricades. The balance, according to the Inter-American Commission on Human Rights (IACHR), was 328 murdered, hundreds of political prisoners and thousands of exiles. For the UN and the OAS, Ortega committed crimes against humanity in Nicaragua.

Far from trying to find a political solution in the so-called Dialogue Table, installed under the auspices of the Church and the diplomatic corps based in Managua, Ortega has decided to settle in political violence. After neutralizing the protests, the president has begun the new stage of repression: the imprisonment of his critics and especially of those who aspire to confront him in the elections scheduled for November. And for this he has used the National Assembly, which has approved laws that allow the criminalization of opponents, and the justice system, with judges who, in the words of Dora María Téllez, “are true hitmen, who have made the macho [borradores de las acusaciones] and they only put the name of the new prisoner ”. The first persecuted were the candidates for a candidacy by the opposition, with special scorn against Cristiana Chamorro, daughter of former president Violeta Barrios de Chamorro (1990-1996) and Pedro Joaquín Chamorro, a national hero assassinated by the Somoza dictatorship. Cristiana Chamorro had barely announced her interest in participating in the electoral process, when she aroused great sympathy among Nicaraguans. It was then that the machinery of justice was cruel against her, raising a case of money laundering through her foundation – named after her mother – an organization that for decades supported independent journalism. In the case against Chamorro, several journalists have been summoned and in the middle the editorial office of the magazine was once again assaulted Confidential, directed by his brother Carlos Fernando Chamorro. A Managua judge ordered the candidate to be married in jail. She was followed by former diplomat Arturo Cruz, academic Félix Maradiaga and former Vice Minister of Finance Juan Sebastián Chamorro García.

The international condemnation came from the voice of the officials of the Biden Administration, which has demanded the release of the prisoners, has classified the regime as a “dictatorship” and has imposed new sanctions against officials and a daughter of Ortega. He, however, has decided to tighten the rope more and has unleashed the second stage of this new repressive wave. The first to be billed is José Adán Aguerri, former president of the Superior Council of Private Enterprise (COSEP), who led the 2018 dialogue table by businessmen, unwittingly turned into an opposition figure. Ortega, who had given entrepreneurs freedom to do business – as long as the profits also benefited him – saw Aguerri’s new position as an affront, arrested Tuesday in Managua. He was followed that same night by Violeta Granera, a prominent activist, and a day later by José Pallais, one of the most lucid jurists in the country and who was also part of the dialogue table. Nicaraguans have been moved by the courage of Pallais, who stoically waited for the police outside his home. These opposition figures were accused of “inciting foreign interference in internal affairs”, a crime contemplated in the Law for the Defense of the Rights of the People to Independence, Sovereignty and Self-Determination for Peace, approved in December by the National Assembly.

The journalist Carlos Fernando Chamorro has cataloged this new repressive escalation of the regime as “a new coup against the constitutional right of Nicaraguans to choose and be elected in freedom.” For Chamorro it is a strategy with two possible ends: to remain in power by force, because free elections represent “a lethal threat to the survival of the regime,” or to establish a dictatorship in Nicaragua under a style similar to that of Cuba, and Venezuela. Two scenarios that fulfill the gloomy prophecy of the late Commander Borge, that the Sandinista Front must continue to govern in Nicaragua “whatever the cost.”