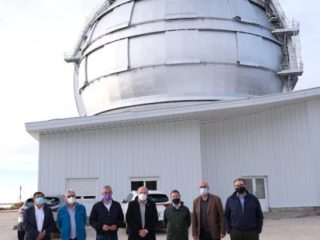 The president of the Junta de Castilla-La Mancha, Emiliano García-Page, has taken advantage of the signing of an agreement in Tenerife to enjoy a weekend of tourist tour of the Canary Islands, in a «private visit», while the citizens of your region cannot travel due to the perimeter closure.

During this «private trip», outside of his official agenda as president, García Page has visited Santa Cruz de La Palma, the municipality of San Andrés y Sauces, and the Roque de Los Muchachos Observatory, located next to the Caldera de Taburiente National Park, accompanied by organic charges from the PSOE of the Canary Islands.

The region chaired by Emiliano García-Page, Castilla-La Mancha, maintains a cumulative incidence of 142.58 Covid cases per 100,000 inhabitants in the last 14 days. According to the official statistics of the Ministry of Health, on Friday it kept 343 Covid patients hospitalized, 58 of them in the ICU.

In a decree approved last Thursday, the García-Page Executive agreed to delay the curfew at 12 at night, but maintaining the perimeter closure of the region (which prevents its citizens from traveling abroad) and the prohibition of meetings of more than six people, both in public and private spaces.

While the citizens of Castilla-La Mancha remain subject to these restrictions, its president, Emiliano García-Page flew to the island of Tenerife on Friday with his Minister of Health, Jesus Fernandez Sanz, to sign with the Canarian president, Ángel Víctor Torres, a cooperation agreement for the development of the Standard, Interoperable and Multiregional Electronic Health Record project.

Then on Friday at 11 a.m., we both regional leaders starred in the so-called dialogue forum Two presidents, two responses to the crisis in Santa Cruz de Tenerife, to publicize the policies that have been applied in the fight against pandemic.

With these two events, before noon on Friday, García-Page’s official agenda in Tenerife concluded and his tourist weekend began on the islands on a “private trip,” as reported by all the archipelago media.

Emiliano García-Page held on Saturday morning a «Tourist visit» to the center of Santa Cruz de La Palma, accompanied by his Minister of Health and by the Secretary of Organization of the PSOE of the Canary Islands, Jorge González Cabrera, who is a regional deputy for the island of La Palma.

During this tour, the three of them photographed themselves with a figure from the folklore of the islands, the lustral dance of the dwarfs (As shown in the image that heads this news). García-Page explained to the local press that La Palma is the only island in the archipelago that he did not know until now and promised to return next year to attend the lustrales festivities of La Bajada de la Virgen.

In this private day of tourist visit, Emiliano García-Page has also been accompanied by the Government delegate in the Canary Islands, Anselmo Pestana; the vice president of the Island Council of La Palma, José Adrián Hernández, the autonomous socialist deputy Manuel Abrante, and the first deputy mayor of Santa Cruz de La Palma, Juanjo Neris.

Then the president of Castilla-La Mancha has visited the tourist municipality of San Andrés y Sauces, where the Ron Aldea distillery and where he has been received by his mayor, Francisco Paz.

Already on Saturday afternoon, again on a tourist visit outside of his official agenda, the president of Castilla-La Mancha has visited the Roque de los Muchachos Observatory, also on the island of La Palma, located on the edge of the National Park from the Caldera de Taburiente. There he has known “one of the jewels of Spanish science and technology, the Gran Telescopio de Canarias”And has been received by its director, Rafael Rebolo. After this weekend of pleasure in the Canary Islands, García Page will resume his official agenda on Monday in Castilla-La Mancha.