PC market: Chromebooks will grow again in the first quarter of 2021 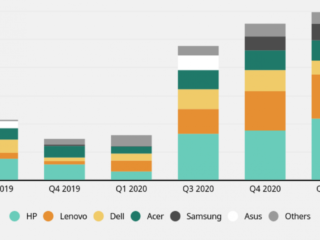 Twelve million Chromebooks found a buyer in the first quarter of 2021, a growth of 276 percent compared to the same period last year. This is the result of market researchers from StockApps.

In the first quarter of 2020, 3.2 million Chromebooks were sold worldwide. With the beginning of the corona pandemic, this increased to 10 million devices with Google’s cloud system in the following six months.

In total, the manufacturers were able to sell 29.6 million Chromebooks in 2020. HP and Lenovo in particular are benefiting from the trend, with 60 percent of devices shipped at the beginning of 2021.

Before the corona pandemic, HP was able to book a good third of the market for itself, but in the first quarter of 2020 the share fell significantly to just under 20 percent. Lenovo benefited from this – previously insignificantly, the manufacturer now achieved 23.8 percent.

Chromebooks also have many advantages in companies: They can be easily managed centrally, offer secure updates and run web, Android, Linux and Windows apps.

In the course of Corona, however, HP’s market share was able to increase back to the previous level without weakening Lenovo’s. Other manufacturers include Dell, Acer and Samsung, which are also benefiting from the trend in terms of devices sold.

Chromebooks are used According to StockApps, it is still primarily in the field of education. Chrome OS has been on the market for over ten years and overtook macOS as the second most popular operating system at the beginning of the year.