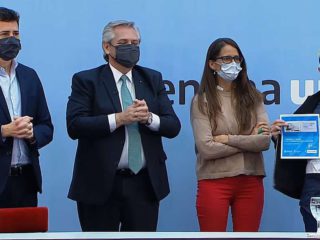 Last week, the national government put into effect the new non-binary National Identity Document for people who do not self-perceive their gender as female or male. A) Yes, Argentines can now enter an “X” to define their sex, both in the DNI and in the passport.

This expansion of rights, however, may be accompanied by immigration problems: only a small number of States recognize a third categoryTherefore, people who process the non-binary DNI could have problems entering other countries.

// Alberto Fernández delivered the first DNI for non-binary people: “What does gender matter to the State?”

From the National Registry of Persons (Renaper) they explained that “the national public administration agencies have 120 days to adapt regulations, systems and technologies for the effective implementation and compliance of the decree” and pointed out that “The Ministry of Foreign Affairs should make a review and a formal presentation to the International Civil Aviation Organization (ICAO) ”, according to Infobae.

The recommendation, for now, is “Check with the Foreign Ministry and the consulate of the country they plan to visit before traveling in case they may eventually have any restrictions of entry, stay or transit in the destination countries ”.

As it transpired, the Renaper will also inform people who want to have a non-binary DNI that they should contact the Foreign Ministry in advance if they want to visit abroad.

// How the DNI will be implemented for non-binary people

For its part, the United States embassy, ​​one of the countries most frequented by Argentine tourists, warned that today there is no possibility of choosing an X when obtaining a visa, so you must choose yes or yes between the above options.

“If a foreign passport does not include a gender / gender field, male or female, applicant must select male or female for visa application from the US and, in such cases, the Department generally issues the visa based on the indication of male or female gender chosen by the applicant, ”they added.

The Government itself recognized in the text that there are very few countries in the world that admit the possibility of choosing a third gender option in an identity document: the Federal Democratic Republic of Nepal, the Islamic Republic of Pakistan, Bangladesh, India and Canada.