PHOTOS: They rescue two dogs trapped at the bottom of the gigantic sinkhole in Mexico 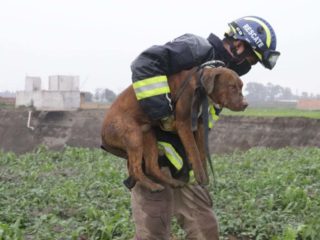 Firefighters and Civil Protection personnel from Mexico rescued two dogs on Thursday that three days earlier had accidentally fallen into the huge sinkhole that recently appeared in a rural area of ​​Zacatepec, in the state of Puebla, informs the Topos Tlaltelolco Rescue Brigade.

The subsidence of the land occurred at the end of May in an area of ​​cultivated fields and since then it has not stopped increasing, already exceeding an area of ​​126 by 114 meters and causing the nearest house to begin to collapse inside the well.

The images recorded by a drone that showed the dogs, Spay and Spike, cornered in a small segment of the hole about 20 meters deep that was not yet flooded by water They had a great impact on the Internet, with thousands of users asking that the animals be helped.

In the middle of the rain and with special dog harnesses, the Spay and Spike dogs that had fallen into the #socavon. A task that was made difficult by the instability of the edges. 🐶 pic.twitter.com/ddNY7zUZT3

There were even many volunteers who offered to help in the rescue, although they were removed from there by professionals as a result of the danger signified by the unstable edge of the sinkhole.

Initially, an operation was planned to raise the dogs to the surface with the help of ropes and cages, but these tasks were interrupted as a result of strong gusts of wind and precipitation.

Finally one of the rescuers descended into the well with the help of a rope secured by his companions and took Spay and Spike out of there without them being injured.

Meanwhile, the authorities reiterated to the population not to approach and “do not take unnecessary risks” in an area that “is still under study to find out what are the causes” that originated the sinkhole that “may continue to increase its dimensions.”