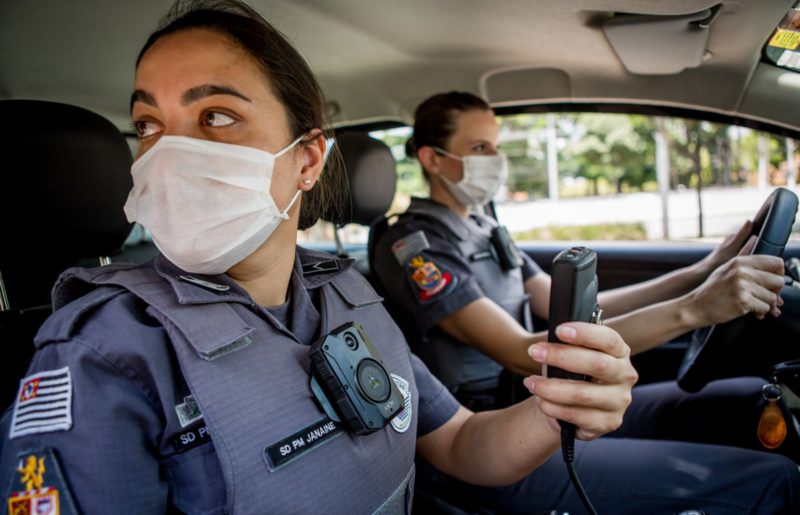 A police operation in a favela in the metropolitan area of ​​Rio de Janeiro last weekend caused a stir because, after a shootout with drug traffickers, the bodies of nine people were found in a swampy area. It is considered revenge for the death of a uniformed man that Friday. In case there were doubts about the contempt for the suspects’ lives, the policemen held a party in a nearby place before and after the São Gonçalo massacre.

But the trickle of deaths due to the shooting of agents, service or payroll, is so daily in Brazil that it tends to go unnoticed. In the heat of the heavy-handed speech, the number of victims has risen to the current record (6,400 dead in 2020, there are 17 newspapers, most of them black). Following in the wake of the United States and other countries, various bodies are implanting cameras on their agents’ uniforms in an attempt to reduce lethality.

The first results in the Military Police of the State of São Paulo indicate a significant reduction in victims. “There is a lot of room for us to move forward, but our reduction in the use of force is very marked,” says Colonel Robson Cabanas, who manages the São Paulo Military Police camera program, which began to be implemented. 17 months ago. Body cameras are the most visible part of deeper changes.

Brazil is among the most violent countries in Latin America and the members of its security forces, among those who kill the most (and die the most) in the world. Here, too, there were protests after the brutal attack on George Floyd, asphyxiated by a white agent in the United States, and changes were demanded. The Government of Rio de Janeiro, the state with the most violent police in this country with great regional differences, has just announced the purchase of 20,000 cameras, an old initiative revived just after the police raid that in May left 28 dead in the favela carioca of Jacarezinho. Not only are the cameras late to help determine what happened there, but the police have decreed five years of secrecy.

The UN has criticized police violence in Brazil, which has never left so many victims since it was recorded. The 6,400 deceased are triple the number registered just eight years earlier, according to the latest Yearbook of the NGO Brazilian Forum of Public Security, which produces a national X-ray of the violence based on official data. This increase is partly due to an improvement in the statistic. The motto “A nice bandit is a dead bandit”It always had followers, but the arrival of the retired military officer Jair Bolsonaro to power has amplified the echo and triggered the purchase of weapons. The former governor of Rio went so far as to defend that when faced with an armed criminal the agents should “aim for the little head … and fire!”

The São Paulo Military Police has introduced more than 3,000 for agents from various battalions, including the most troublesome. The plan is to have 10,000 devices on the street by next June. They are the most visible part of a larger reform, he says. The first results are positive. Since June 2020, the body has caused fewer deaths every month than in the same month the year before. For example, October. They went from 71 deaths (in 2019) to 34 (2020) and to 32 this year.

Melina Risso, an expert in public security at the Igarapé Institute, considers the expansion of the cameras to be very positive. He states that “it is still early to make conclusive analyzes, but the first results are very promising.” And it highlights that they are in line with the analysis that this think tank made a similar experience, in a smaller state, Santa Catarina. “There, our results showed that the cameras reduced the use of force by the police by up to 60%.”

However, even with the downsizing, the figures are light years away from the model region in this chapter, Western Europe. It is enough to compare the State of São Paulo with Spain, both with a similar population. Even with cameras, in the richest state in Brazil and where the homicide rate has fallen in the last 20 years, twice as many citizens are killed by police shots in one month than those registered in Spain during five years. However, two men have been killed this month in Madrid by soldiers.

Colonel Cabanas highlights an innovation developed with the São Paulo cameras that, he says, solves one of the most frequent problems here and abroad: the agent who voluntarily or by mistake does not activate the camera despite being obliged. The São Paulo devices make two recordings, one of lower quality and without sound during 12 hours of the shift; and another with more resolution and sound that can be activated by the uniformed man himself, one of his bosses from a distance or that automatically begins to record if the policeman fires a shot. The device also makes it possible to recover the previous moments of a critical moment, he explains.

“People believe, from the outset, that the cameras are going to inhibit the police from committing abuses, but the change is much more profound,” he says. It details other changes introduced such as the reinforcement of training, inspections, internal investigations and the purchase of new tools that allow the use of force to be graduated. Thousands of pepper spray and more than 3,700 have been distributed among the agents in São Paulo. tasers, neuromuscular incapacitation weapons, to reduce suspects without resorting to firearms. Each use of the taser “These are deaths that did not occur,” emphasizes Cabanas, who highlights that before implanting the cameras they traveled to the United States, Germany or London to learn about their experiences first hand.

Specialist Risso argues that cameras alone will have a very limited impact: “Reducing the chronic lethality of Brazilian police forces depends on a political decision to change the planning of police operations and actions with investment in training, supervision and , above all, zero tolerance for excesses ”. So far this year, the Sao Paulo Military Police has opened more than 1,400 internal investigations, 190 agents have been arrested and 47 expelled from the body, according to official data.

It is not often that they sit on the bench and less often do they go to prison. Four officers were convicted of murder last week, but in August another five were acquitted by a popular jury of participating in a massacre in a favela three decades ago.

The troops received the devices with distrust, fearing that it would be used for disciplinary matters (such as the use of WhatsApp), Cabanas says, but insists that the recordings also protect them. Among other reasons, because they serve as evidence before a court and because when the citizen who interacts with the agent sees the flickering of a red light in the chest camera, he knows that they are recording him and he also restrains himself.

Simultaneously, a new danger looms for the agents, the increase in armed citizens. The legal reforms promoted by the far-right Bolsonaro have contributed to a phenomenon that began before his victory. Firearms in the hands of civilians have doubled in just three years. They total 1.2 million, according to the aforementioned Brazilian yearbook. Therefore, the probabilities that the patrol cars, in addition to running into criminals who respond to gunshots, increase the chances that they will meet more citizens than at the slightest touch they will draw a weapon.