Polisario No. 2 admits to OKDIARIO that Ghali plans to escape: “He will leave Spain, he will not go before the judge” 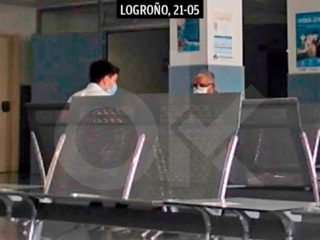 The right hand of Brahim Ghali and number two of the Polisario Front, Salem Lebsir, has acknowledged to OKDIARIO, in an exclusive interview, that the Arab military man plans to leave Spain in the next few days without declaring in the National Court, where he is accused of the crimes of terrorism, genocide and torture, among others. “It’s all a lie. As soon as he recovers, which will be in 10 days, he will leave the country. He will not appear before the judge “, assures his dolphin.

The interview between Salem Lebsir and this newspaper was carried out in a small waiting room of the San Pedro de Logroño hospital just five meters from the room where the leader of the Polisario Front is recovering from the coronavirus. It is the first time that someone from Ghali’s environment has spoken in the media after the outbreak of the greatest diplomatic crisis of democracy between Spain and Morocco.

The head of the Central Court of Instruction number 5 of the National Court, Santiago Pedraz, has reopened the case against the Saharawi leader for crimes of genocide, injuries, illegal detention, terrorism, torture and disappearances and has summoned him on June 1. However, Lebsir has emphatically assured this newspaper that Ghali is not going to testify. “Why is he going, because some pro-Moroccans have fancied it?”. According to him, these actions are only intended to tarnish Ghali’s image.

At the moment when several agents of the National Police appeared at the hospital center to notify Ghali of the judicial summons, the leader of the Polisario Front refused to pick up the document, claiming that he had to consult it first with the Algerian Embassy and with some people you trust.

During the interview, Lebsir denies that Ghali entered Spain with falsified documentation despite the fact that he entered the hospital under the identity of «Mohamed Benbatouch» and in the medical reports it appears as «Mohamed Abdellah». He also tells us that the massive arrival of illegal immigrants to the cities of Ceuta and Melilla is the result of a blackmail by the Moroccan authorities to the Spanish authorities and not because the Government of Spain has received Ghali. “The Spanish are free, they are not slaves of the Moroccan monarchy,” he explains.

QUESTION: Can Ghali speak, is he conscious?

Q: And do you have sequelae from the coronavirus?

R: Aftermath, yes, of course. The coronavirus, when you catch it, it gets into you. Anyway, it’s coming out of all the sequels and I think that in a week or two …

Q: And is he aware of everything that is happening in Spain? What do you think?

Q: And what does it say?

R: He? We know Moroccans very well. There is blackmail between the Moroccan authorities and the Spanish authorities. You understand? It is not very difficult to say. The Spanish are free, they are not slaves of the Moroccan monarchy.

Q: Is Ghali going to testify at the National Court?

Q: Are you going to testify at the National Court?

Q: Are you not going to testify?

Q: What if you are summoned by a judge?

R: Neither either. For the whim of some pro-Moroccans?

Q: Is it true that you have entered Spain with a false identity?

Q: It has been published. Is not true?

Q: And what do you think of all the accusations of rape, torture that various people do to you?

R: Nothing at all.

R: Is a lie. He has never gotten into those things. What they want is to dirty the image of him.