Home
News
Prayers, jumps and a strange ‘language’: Michelle Bolsonaro’s reaction after the election of an evangelical pastor to the Supreme Court goes viral

Prayers, jumps and a strange ‘language’: Michelle Bolsonaro’s reaction after the election of an evangelical pastor to the Supreme Court goes viral 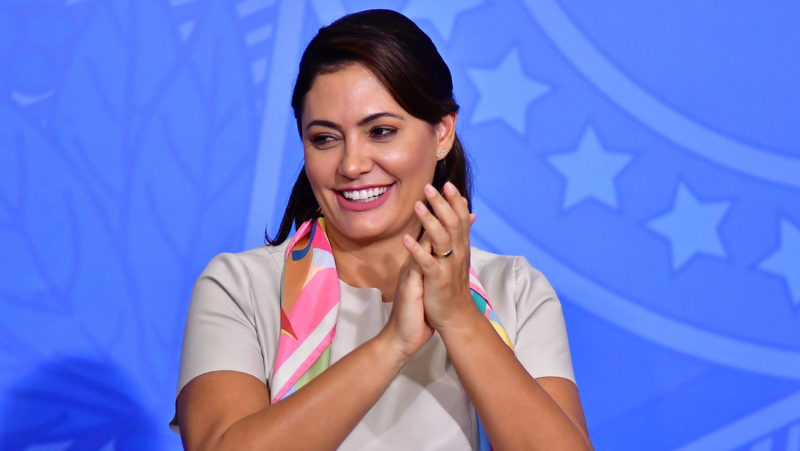 If anyone celebrated the election of the evangelical pastor and former Minister of Justice André Mendonça to a position in the Supreme Federal Court (STF), it was Michelle, the wife of the president of Brazil, Jair Bolsonaro.

In a video, which has gone viral on social media, Michelle appears in a room with Mendonça, following last week’s Senate vote on television.

Hearing the results, Mendonça raises her arms in a sign of victory. But what most attracted attention was the reaction of the president’s wife. Michelle, excited, begins to jump. “Glory to God! Hallelujah!” He exclaims. The first lady begins to speak in an indecipherable language and melts into a hug with Mendonça and two other women.

The first lady of Brazil, Michelle Bolsonaro, dances, and prays in tongues, when the news comes out that the pastor, dr. André Mendonça was elected as Minister of the Supreme Court of Brazil pic.twitter.com/XKS7ntVEaG

The Evangelical Deputy Sóstenes Cavalcante explained to the Folha de Sao Paulo the reason for these unintelligible words that so surprised: “In Pentecostal doctrine, when a person receives a strong charge of emotion and the presence of the Holy Spirit, one of the ways we use to express this joy is what that the Bible teaches in the book of Corinthians, the gift of speaking in other languages“.

According to Cavalcante, these are languages ​​with which they communicate with God. “Only God through the Holy Spirit understands that language, it is not a natural language,” he said.

The first lady’s reaction was widely criticized on social media. Many considered that it is a reflection of the future decisions of Mendonça in the STF.

“The video of Michele Bolsonaro celebrating the approval of André Mendonça for the STF says a lot about the future role of the minister. Fundamentalists and pocket storytellers hand in hand imposing an agenda of setbacks for the country!”, he comments a user.

Other said: “This video by Michelle Bolsonaro would be funny if it weren’t a reflection of who’s running the country: a handful of elite white Christians who say nothing and manipulate half a dozen ignorant people out of fanaticism. “

“Michelle commemorates Mendonça’s position in the STF in ‘strange language’, glossolalia. Did the Holy Spirit descend? Will Mendonça write her vows in Portuguese? Maybe glossolalia is preferable!”, wrote the journalist Reinaldo Azevedo.

Nor were the memes lacking because of the “language” used to express themselves.

It wasn’t all teasing. The mayor of Rio de Janeiro, Eduardo Paes, defended Michelle and described the comments on the networks “regrettable”. “My solidarity with the first lady. May she always manifest her faith and freedom”, asserted.

“First lady Michelle Bolsonaro is the target of religious prejudice for expressing her faith when she learned about the approval of André Mendonça’s name for the STF. Keep spreading the good, Michelle. Don’t let us down, future minister,” underlined the deputy Rogério Peninha.

The election of Mendonça, 48, has been a triumph for the evangelical bench in Congress, whose leaders fought until the last moment for his name to come forward.

Bolsonaro thus fulfilled his promise to place someone “terribly evangelical” in the STF. The evangelical group was essential in the arrival to power in 2018 of the extreme right and it will also be so in the presidential elections of October 2018.

The arrival of Mendonça to the STF comes at a delicate moment for the president, who has five open investigations in the Supreme Court.

The last to be opened was last Friday for spreading false news that linked the anticovid vaccine to the AIDS disease. Judge Alexandre de Moraes’ decision responded to a request from the Senate committee that, after six months of work, accused Bolsonaro of nine serious crimes, including crimes against humanity.