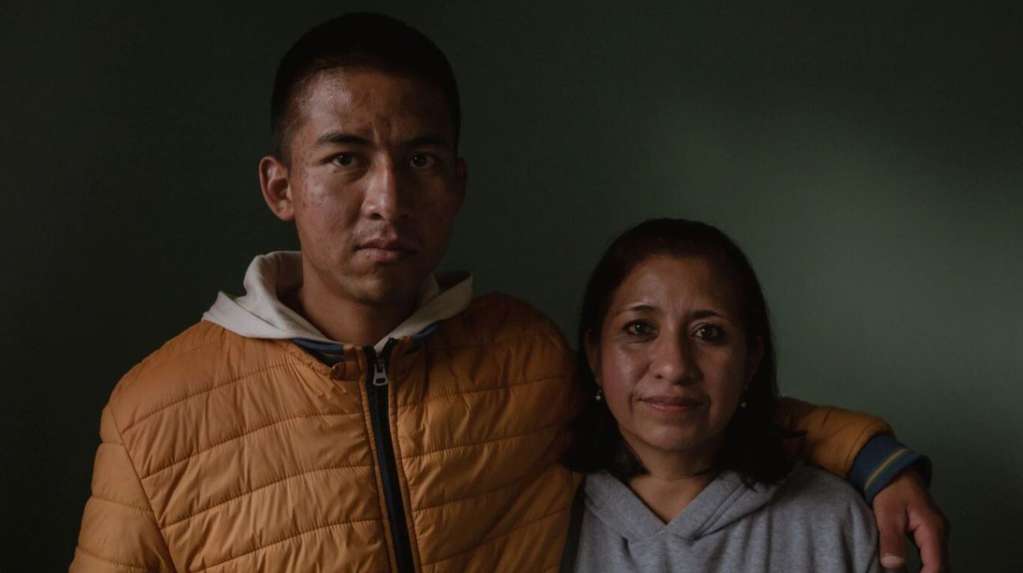 Prisoner for stealing a slice of watermelon: the unusual story of the young man who spent nine months in jail and was released thanks to the owner of the greengrocer

On San Salvador Atenco, Mexico, each one has their version of what happened in the Greengrocery Nancy last October 5. Some say that Uriel nuñez (a 24-year-old young man) came in drunk and with his machete he split a watermelon in the middle. Others argue that Uriel actually asked Nancy for a piece of fruit and she gave him an apple. They explain that the young man was left hungry and that it was there that a portion of watermelon was cut without authorization from the greengrocer.

Some say that Uriel is the pride of his mother Jovita (with whom he still lives) and that he was walking with a machete because he was coming back from helping his grandfather Manuel cut the plants. While others maintain that Uriel came in drunk and aggressive and that is why Nancy denounced him. Some say that Uriel wanted to rob Nancy. Others believe that Nancy actually called the police because she was scared.

// From millionaire to beggar: the Jamaican businessman who wanted to be Walt Disney and ended up living on the streets

The interpretations are so different that they make us think that we will never know what happened. But not to despair. Many times the versions, although contradictory, are not exclusive: that is to say that they can all be true. Of course, in different doses. This is what happens in the Case of the Atenco Watermelon and it is something that we will confirm as the note progresses.

But on the one hand there are the versions and on the other there are the facts. And the latter have no discussion. We will now talk a little about that. Of the harsh reality that Uriel had to live as a consequence of his passage, that day, through the greengrocer.

So let’s start there. Uriel was also charged with theft. The policemen said that he had wanted to take 180 Mexican pesos, something like nine dollars or 1503 Argentine pesos depending on the cash with liqui. Uriel says that is a lie and even Nancy the greengrocer told Jovita (Uriel’s mother), that it had not been so. Anyway, the process went ahead.

The only proof of the theft is a photo. There you see a basket with 2 bills and 5 coins. But notice a scandalous contradiction. The photograph that took Uriel to jail is the same one that would have acquitted him. Because if the money was in Nancy’s basket and it wasn’t in Uriel’s pocket, where is the theft?

Good question. But let’s not stop at it because The whole case is that crazy. Let’s move on to the question of watermelon butchering. And let’s start with the proven data. Uriel came into the grocery store drunk and asked Nancy for a piece of fruit. She gave him an apple. The atmosphere in the greengrocer was very tense (I am speculating now). Imagine: on the one hand, a drunkard with a machete in his hand; on the other, a working woman.

Uriel says he remembers asking Nancy for the apple with great respect, but it remains to be seen if Nancy ever played it. In Atenco, violence against women reached unthinkable limits. There 15 years ago an aberrant event took place, the case known as “The women of Atenco.” In a protest on May 3, 2006, the police arrested 11 women, tortured, abused and raped them. The Inter-American Court of Human Rights intervened, which in 2018 condemned the Mexican State. The sentence is considered historical. Mexico admitted its responsibility to have tortured 11 women and having used physical, psychological and sexual violence against them.

The ruling is very good, but the Government did not comply with the sentence. It has yet to find and punish those responsible as well as compensate and provide medical and psychological treatment to the victims. And something else: the State is going to have to hold a public act where you have to acknowledge your responsibility and apologize to the victims. But he didn’t do any of that.

This case is being talked about these days in Atenco. There are demonstrations in the streets and the newspapers cover the issue again. It is an important piece of information. Because without taking for true Uriel’s statement that says that he did not want to steal, I think it is very possible that Nancy was very scared. Proof of that is that he went out of business and went to find the police. And it was there that Uriel was left alone.

The expertise on the watermelon on file

It was at this time that the incident with the watermelon occurred. We do not know if Uriel was still hungry and decided on the watermelon, or if the crazy one grabbed him and started with the machete blows. Those are the two versions. It is difficult to come to a conclusive conclusion because there Uriel was alone.

But let’s get back to the data. From the cold reading of the file we can undoubtedly know that it was a watermelon approximately 45 centimeters long with a circumference of 50 centimeters. From the expertise it is deduced that “A diagonal cut of an approximate length of 25 centimeters is observed”. There is no data on his kilage.

From the data provided we can conclude that it was a medium watermelon, rather round than oval, different from the ones we eat here. We can also deduce that the damage inflicted on the fruit would not have been so serious. There is no strong evidence of what Uriel did or did not do.

In subsequent statements, Uriel acknowledged that he was very drunk and that the last thing he remembers is that he ate an apple. Consequently nothing could add to what happened with the watermelon. As he was alone at that time, he does not remember what happened and we will never know. We will never know if he wanted to eat it or hit it and hit it like crazy with the machete.

Very well. We had agreed that Uriel was left alone at the grocery store (that’s what they say in Mexico to greengrocers) and that he did something with a watermelon. Nothing else for now. A while passed and Nancy returned accompanied by security forces personnel.

The police considered the incident an intimidating act. It doesn’t seem like an unreasonable rating. Let’s review: a town where they still claim for the torture and rape of 11 women just a few years ago, a drunkard with a machete entered a greengrocer run by a woman to ask for fruit.

But to this “Intimidating act” the police added to the file an alleged robbery and with that the case took off. And it rose to the stratosphere. They arrested Uriel who spent 15 days in a dungeon, nine months in jail and with the possibility of having to spend nine years behind bars if the judge had sentenced him.

This disproportionate reaction from the police is partly explained by the level of violence experienced in Mexico. There the fight with the drug traffickers reached alarming levels. Crazy things happen that prove it. For example, the city of Aguililla has been isolated for months. The military only blockade the city, but do not dare to enter. It is because in Aguililla there is a war without quarter between two criminal gangs that fight to control their dirty businesses.

This is how we see that the security forces in Mexico do not get so involved with drug traffickers, but when it comes to people who attack watermelons the batteries are there. Instead of going against the heavy criminals, the security forces prefer to target the youngest, the poorest, the indigenous and the most disadvantaged in society. Does it ring a bell?

In Mexico there are many stories of innocent prisoners. The most extreme case is that of Ramón Ramírez Valdovinos who for 19 years has been deprived of his liberty accused of murder. The disturbing thing is that the person whom -according to Justice- he killed is alive. Ramón is 41 years old and He still has 21 years of sentence left.

Human Rights organizations calculate that there are 17 thousand Mexicans unjustly imprisoned. This is what they call those who were convicted with confessions made under torture, those who fabricated evidence or those who were detained without a judge’s order, among other irregularities.

The cases of “Unjustly imprisoned” it is a subject of weight in the public discussion. So much so that it was much discussed in the last electoral campaign. The candidate Andrés Manuel López Obrador He promised an amnesty for those accused of minor crimes when the process was irregular. AMLO won the elections and today he is president. And he kept his promise and sanctioned the amnesty.

It was thanks to this Amnesty Law that Uriel managed to get the judge to sign his freedom. But the story of the watermelon does not end here. The judge put one last condition for Uriel to go home. I could only do it after paying Nancy, the greengrocer, 86,680 Mexican pesos, just over $ 900.

The compensation was very high for the Núñezes, which is why Uriel was detained despite having been included in the amnesty. But not for much longer. The solution did not come from the hand of the president, or the police, much less justice. Jovita Núñez (Uriel’s mother) approached Nancy’s greengrocer. They say that the latter, sensitized by the absurdity of the situation, promised that she would do anything to get her son released. And he fulfilled.

Nancy signed that she had received $ 900 from Jovita. Nobody in Atenco believed it. Where was Jovita going to get that money from? In the world turned upside down, it was that signature, that of the victim, and not that of a judge, that allowed Uriel’s release after nine months in prison for picking on a watermelon.