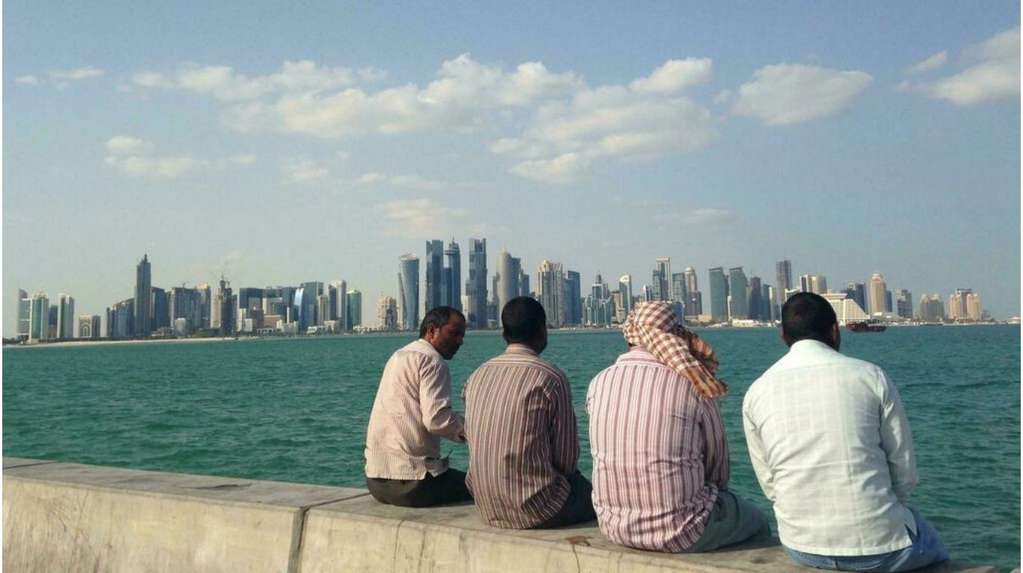 It is a small supermarket lost in the industrial zone of Doha, far from the sanitized luxury of the malls that Qataris and wealthy expats frequent. Across the street, behind a perimeter wall, you see rows of sand-colored buildings: a housing development for immigrant workers.

In front of the entrance of the shopping center, you have to be patient to start a conversation with the men who come and go, but as the conversations go on, fragments of lives of exile and work. “Yes, there are a lot of Nepalese in Qatar,” says a 42-year-old driver who has been working here for three years. He tells us that he had to pay an agency in his country to find work in the Gulf, even before he received his first salary. “I earn 2,500 rials (about 600 euros), which is better than in Nepal,” he says. With two children in the country, she sends most of her salary – 2,000 riyals – to her family each month.

Read also: They claim that more than 6,500 migrant workers have died in Qatar since it was chosen to host the 2022 World Cup

He has not seen his family for two years. Covid-19 has further reduced the number of infrequent returns of these immigrants. Many are reluctant to leave for fear of not being able to return or incurring quarantine expenses. This Nepalese worker seems satisfied with his housing conditions, in a room that he shares with three of his compatriots. And he entrusts us with his dream: to return home, buy a minivan to work as a taxi driver on the roads of Nepal.

Like him, there is more than 2 million migrant workers in Qatar (out of a total population of about 2.5 million), mainly from Nepal, India, Bangladesh and the Philippines, but also from the Middle East and Africa.

For the past 10 years, Qatar has been preparing for the World Cup, which has drawn much attention to the plight of these migrant workers in this Gulf country. A few months ago, the debate was rekindled by the British newspaper The Guardian, which claimed to have tallied 6,500 deaths on construction sites in Qatar over the past decade. Qatari officials with whom RFI met in Doha question this figure and the method used.

In this delicate matter, a new element appeared a few days ago: a report from the International Labor Organization (a United Nations body that recently opened an office in Qatar) that counts 50 deaths linked to occupational accidents of foreign workers in Qatar in 2020. But this report does not include a series of deaths that should be classified as occupational accidents, acknowledges Max Tunon, who represents the ILO in Doha. “The report calls for a more systematic investigation by the Ministry of Health, but also the Ministry of Labor, when the deaths may be related to work,” says Tunon.

Another recent report on Qatar is that of Amnesty International, which notes that the emirate authorities they do not keep a clear record of the number of deaths related to working conditions. “We have followed the cases of six people who died in Qatar due to their working conditions, and on all occasions the death certificate mentioned natural causes or heart problems,” explains Lola Schulmann, from Amnesty International, who points out that there is a justification problem for these deaths, which are not recorded as occupational accidents. This has consequences for families who have to go into debt just for the body to be repatriated.

The reforms of the stadiums of the Qatar World Cup 2022

Faced with criticism of workplace accidents and the working conditions of foreign workers, Qatari officials point to the reforms adopted in recent years. “The claims that we neglect, ignore or do not investigate when people die for some reason or other are not true,” says Hassan Al Thawadi, secretary general of the organizing committee of the event.

“When we embarked on the World Cup, we always said it was a catalyst for positive change and working conditions were at the top of our priority list,” says Al Thawadi, recalling, for example, the obligation to stop working at certain times of the day, when temperatures are unbearable on construction sites. Qatari officials also note that a minimum wage (1,000 riyals – about 240 euros – plus 300 riyals for food and accommodation, generally paid for by the employer).

What’s more, the country has abolished kefala, a very widespread professional sponsorship system in the region that subjects the foreign employee to his employer. “We have managed to reform many laws,” says former diplomat Youssef Al Khater, who was his country’s ambassador to the United Kingdom.

“The kefala system, the exit permit and everything related to the confiscation of passportss of workers. Now they have the right to move from one company to another. In Qatar we have succeeded, but look in the region … in our neighboring countries, you will see that these laws are still in force, ”underlines Al Khater, recently elected to the Shura, the emirate’s advisory council.

Qatar believes that it is ahead of its neighbors, but this is not enough to silence criticism. Especially those made by Amnesty International in its latest report (“Reality Check”) on the Qatari ads. A year ago we were hopeful, the votes had been approved ”, admits Lola Schulmann, from Amnesty International,“ but since then we have seen that companies pressure the government because these reforms do not allow them to have a malleable workforce ”.

Amnesty cites cases of workers who have been hampered despite the fact that the abolition of Kefala makes them theoretically free to change employers. Amnesty International is also reaching out to FIFA and the French Football Federation to ask them to speak out in favor of the rights of foreign workers in Qatar.