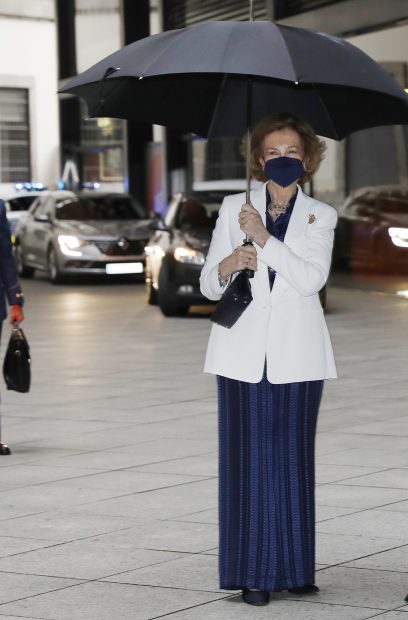 Queen Sofia finds the perfect uniform for her special dates

Intense activity for the Queen Sofia. Felipe VI’s mother has returned strongly to the agenda of the Royal Household after spending a few days in her homeland, where she has traveled twice in recent days.

At the beginning of the week, Doña Sofía participated from the Zarzuela Palace in a telematic meeting on the occasion of World ELA Day with the Cien Foundation. A meeting within the framework of the agenda of the House of HM the King, but closely linked to the Reina Sofía Foundation.

On this occasion, Doña Sofía has enjoyed one of her favorite activities. What Honorary President of the Reina Sofía School of Music, the Queen Mother presided over the closing ceremony and concert for the 2021-2021 academic year, which was held in the Reina Sofía National Art Center Museum from Madrid. It is one of the four programs through which the Albéniz Foundation carries out its activity, together with the Paloma O’Shea Santander International Piano Competition, the Albéniz Archives and Documentation Center, and the Music and Academy Meeting of Santander.

For this appointment, Queen Sofia has recovered the same outfit that she wore just a few days ago at the Zubin Mehta concert she attended with her brothers and sister-in-law in Greece. It was a very special date for the wife of King Juan Carlos, since it was the first time she had been seen in public with King Constantine and also at a concert, one of her greatest hobbies.

The Queen has worn a set of satin palazzo pants in blue with a matching blouse and white blazer. A combination that, apart from its sailor air, stands out especially for being the emblematic color of the Principality of Asturias, in a nod to Princess Leonor, who has made this color range her favorite.

This has been the first of the face-to-face events planned for Queen Sofía this week. In addition to the virtual meeting held on Monday, Felipe VI’s mother will travel to Mérida at the end of the week to preside over the extraordinary concert “Chamber Music in Heritage Cities”.

The Higher School of Music It was created in Madrid in 1991 with the purpose of providing Spain with a high professional training center aimed at young talented musicians. Thanks to theme put an end to the need for many of the best Spanish artists to have to leave the country to receive higher education. The school enjoys wide international recognition and welcomes students of all nationalities, with special attention to students from Spain, Portugal and Latin American countries.

The center’s mission is not only to train soloists, but also musicians capable of easily integrating into important chamber orchestral groups, winning prizes or accessing positions for professors and professors in schools and conservatories. Their work is designed for young people who in a few years will return to the same stages where they acted as students, already turned professionals.