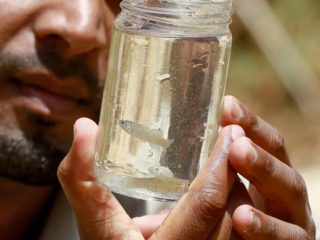 Jordan is racing against the clock to save the Dead Sea carp, a tiny, endangered fish that lives in a wetland.

It is a 4 cm long fish of silver color with blue reflections if it is male and black stripes if it is female. Since 2014 it has been included in the list of “endangered species” established by the International Union for Conservation of Nature (IUCN) based in Switzerland.

The only place where you will find the “Dead Sea carp”, whose scientific name is Aphanius Dispar Richardsoni, is the Fifa reserve, 140 km southwest of Amman.

This area, created in 2011 and managed by an independent NGO, the Royal Society for the Conservation of Nature (RSCN), is located 426 meters below sea level, which is why it is considered, according to the Ramsar International Convention, the lowest wetland in the world.

Although most of Jordan is desert, this 20 km2 reserve is crossed by streams and is home to many species, especially birds.

“This fish only exists here and we have taken measures to prevent its disappearance,” Ibrahim Mahasneh, director of the reserve, located 60 km south of the Dead Sea, told AFP.

“We are establishing a specific habitat that will protect it from predators,” Mahasneh explains.

“Various threats weigh on this species, such as low water levels due to low rainfall, but also the presence of fish that eat them and also their eggs,” explains Abdalá Oshush, an environmental expert who works in the reserve.