Rebellion in Los Angeles: cows determined to survive undertake a massive escape from the slaughterhouse (VIDEOS) 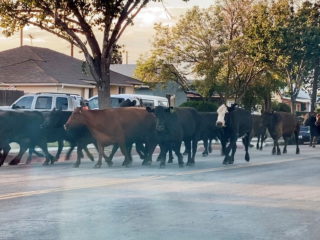 Refused to become future hamburgers, 40 cows rebelled against their fate of being slaughtered for their rich meat and, using an inadvertently open gate, collectively escaped Tuesday from a slaughterhouse near Los Angeles.

WHO HERD IT🐄🐮🚨 A herd of cows leads deputies on a chase across Pico Rivera.STORY >> https://t.co/aNLLlfoAaEpic.twitter.com/QpgFPMfclO

Breathing the air of freedom, the animals walked about a kilometer and a half until they reached the residential area of ​​Pico Rivera and took over its streets. One cow even attacked four members of a family, who fell to the ground and suffered minor injuries. There was also another confrontation between one of the animals and a volunteer who tried to corner him and he ended up on the ground.

The municipal manager of Pico Rivera, Steve Carmona, commented to the local channel KTLA that at one point he was forced to jump into a car so that the cattle would not run over him, adding that the situation was quite “appalling.”

The freedom of the cows, however, was brief. Local police helped round them up and return them to the meat processing plant from which they had fled. “Of the 40, 38 were captured, one was killed and another has not been located,” they detailed from the police department in statements collected by AP.