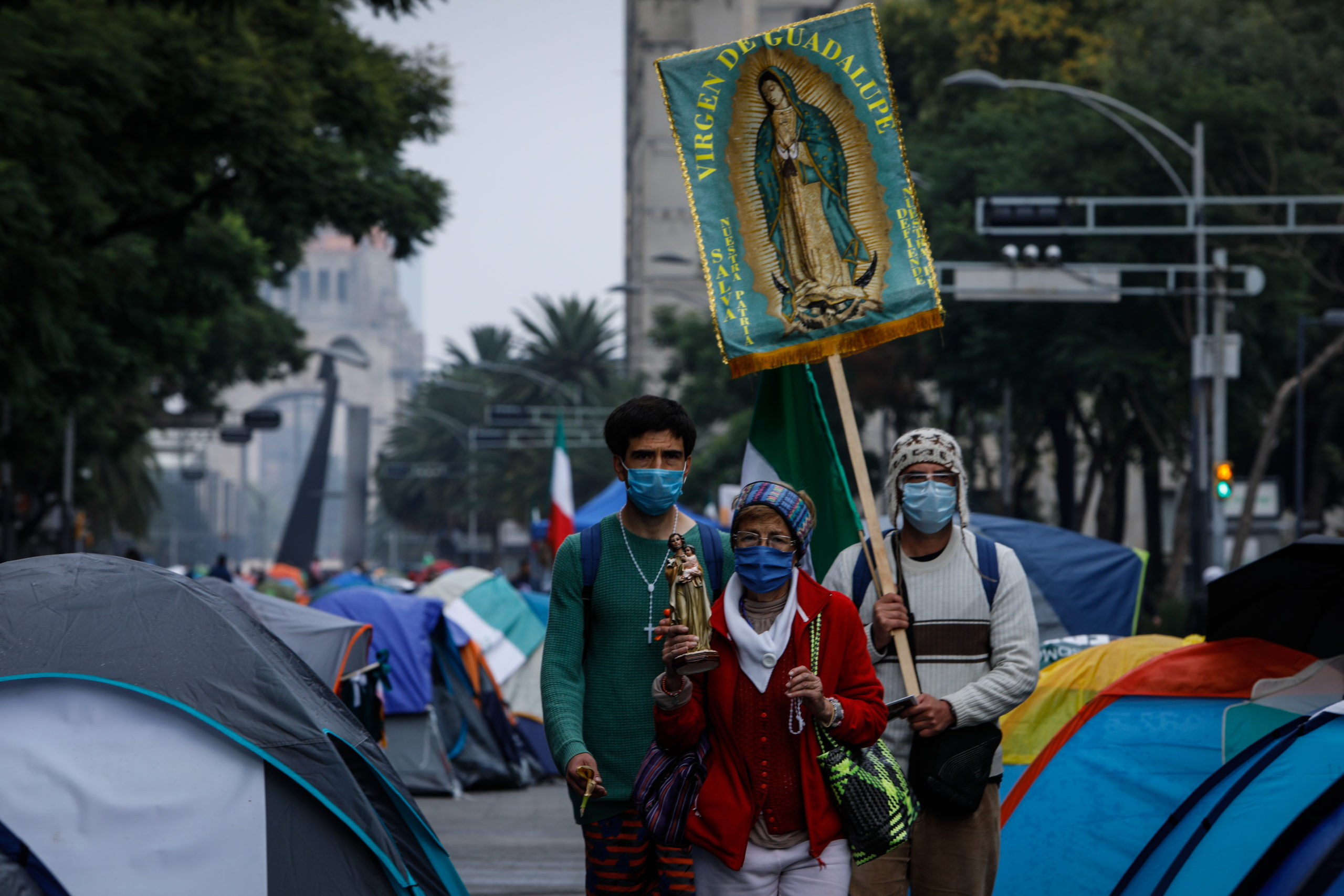 Religious fanaticism and anti-communist crusades: who’s who on the Mexican extreme right

A meeting, a photograph and Pandora’s box was opened. The leader of the far-right Spanish Vox party, Santiago Abascal, landed ten days ago in Mexico City, where he met with senators from the National Action Party (PAN) and even two politicians from the Institutional Revolutionary Party (PRI). The meeting unleashed a gale in the two opposition groups to the Government of Andrés Manuel López Obrador. The first removed the political operator who organized the event and the second completely disassociated itself from any agreement with Vox. Abascal arrived seeking adherence to the so-called Madrid Charter, a kind of manifesto “in defense of freedom in the Iberosphere.” That is to say, the germ of a cultural war, a crusade that they intend to wage in the region waving the scarecrow of a supposed communist threat.

The PAN is a conservative organization that integrates some radical voices and sectors, but as a whole the experts do not consider it comparable to Vox, founded in 2013 precisely as a split from a neoliberal force with a broader ideology, the Popular Party, with which later However, he agreed. The question is whether in López Obrador’s Mexico there is electoral space for the extreme right and authoritarian discourse beyond anecdotal manifestations. And who can embody that rhetoric, which has almost always gone hand in hand with religious fanaticism or ultra-Catholicism. Francisco Abundis, director of the opinion analysis firm Parametría, sees the country reluctant to this trend. “Politics and religion don’t usually mix. From the outset, the Mexican does not like to unite the two things ”, he affirms. In addition, the data indicate that, even in the case of believing and practicing citizens, the percentage of voters willing to follow the instructions of a parish priest is small. That predisposition is less, at least among Catholics, Abundis notes.

That does not mean that the extreme right does not exist in Mexican society. “Of course it exists, and it is not only a political expression, but it is also exposed politically, economically and socially. There is also a fourth area, which is the intellectual one ”, maintains Luis Ángel Hurtado, consultant and academic in the Faculty of Political Sciences of the UNAM. “The most visible movement today, although it is not the only one, is FRENA.” The so-called Anti-AMLO National Front took center stage a year ago by improvising a camp in the Zócalo of Mexico City to protest against the Government. They define themselves as a “peaceful citizen movement that wants to act now to remove” López Obrador, they say they use “legal tools, social pressure and the media” and their leader, Gilberto Lozano, businessman and former president of the Rayados de Monterrey club, he is engaged in a campaign for the revocation of the president’s mandate. In line with Santiago Abascal’s speech, however, they believe that a plan sponsored by the São Paulo Forum is underway to implement communism in Mexico through population control and the redistribution of wealth.

Hurtado recalls that this organization is also part of the tradition of the Mexican extreme right, which is the Catholic court and the religious bond in general. At the same time, it differs from them by being a public movement, unlike reserved societies such as Los Tecos -initially linked to the Jesuits until the order dissociated itself due to an armed attack-, Los Conejos, which had ties with the Lasallians, or El Yunque. “They were sworn groups and in the oath they promised to keep secret. This element in FRENA is not characteristic. Seeks López Obrador to resign and has differences with other ultra-right groups, the FUA [Frente Universitario Anticomunista] and El Muro, who expressed themselves in a violent and more radical way. In the case of FRENA, this is not the case ”, he continues.

There is a red thread that unites past and present in the history of the extreme right in Mexico. It happened almost a century ago with President Lázaro Cárdenas and later with Adolfo López Mateos. “It is very interesting to see how the threat of communism always comes out, and there are people who believe it even if it is not true,” says Fernando González, an academic at UNAM who has spent decades studying this phenomenon and the consequences of what he calls “conspiratorial Catholicism ”.

On the far right map, two universities and two cities, Guadalajara and Puebla, are important. Under the mandate of Cárdenas, the University of the West was founded in Jalisco, which would later be called the Autonomous University of Guadalajara, the first private center in the country. That, he affirms, was “a nest of tecos” and some of the founders of the PAN in that State also come from there. Almost twenty years later, he continues, between 1953 and 1955, El Yunque was founded in Puebla at the hands of Manuel Díaz Cid, a historic far-right ideologist, and Ramón Plata Moreno, assassinated in 1979 after leaving Christmas mass. In 1965, recalls the researcher to understand the scope of the delusional aspirations of this movement, the organization’s leadership held a meeting in which “they maintain that Pope Paul VI is an Ashkenazi Jew and they are going to declare the position vacant.” González maintains that “from the sixties El Yunque was already in the Coparmex employer’s association and between 77 and 78 they decided to infiltrate the PAN.”

But before El Yunque, another nationalist organization with far-right positions, the Unión Nacional Sinarquista, started in Guanajuato. And linked to her there was a surname that – by chance onomastic – coincides with that of the leader of Vox. Adalberto Abascal, father of Salvador Abascal, one of the founders of synarchism, who in turn was the father of Carlos Abascal, now deceased, Secretary of Labor and Government of Vicente Fox. Fernando González places him at the time as the leader of El Yunque.

However, personal or even sector connections do not make PAN an organically far-right party. Hurtado considers that it is a “media issue, because the PAN is not far-right, there are members who are playing in the 2024 elections and want to make noise.” “These years we are seeing a PAN very different from far-right parties that have existed in Mexico, which were a wing of the synarchist movement.” It is a broad formation and even López Obrador, in the ideological antipodes of the PAN, invited this Sunday the outgoing governor of Nayarit, of that party, to be part of the federal administration.

MRT spoke last week with American journalist and essayist Anne Applebaum, an expert on far-right organizations and the decline of liberal democracies, about Vox’s strategy, which also registered its trademark in Mexico. It is your opinion, it is an internationalization plan. “They are very interested in having international alliances that help these types of parties to be born in other places,” he says. More in a region that has suffered from the drift of self-styled left wing projects. But it remains to be seen, as Francisco Abundis underlines, that a political figure can pick up the gauntlet of Santiago Abascal in Mexico with realistic electoral aspirations, perhaps beyond the projection of the right in states such as Guanajuato, Querétaro or even Jalisco.