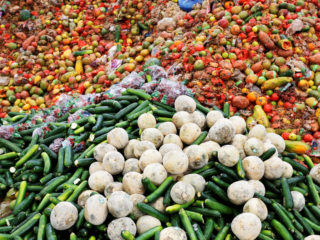 Titled ‘Driven to Waste’, a report published jointly by the World Wide Fund for Nature (WWF) and the supermarket chain Tesco revealed that the total food loss or waste exceeds 2.5 billion tons, about 40% of all the nutrients produced in the world each year. Much of that underpricing it occurs on farms during, around and after harvest, in an amount equivalent to 15.3%.

The report highlights the need for measures to address food loss in plantations and processors Worldwide and not only in specific regions, with a focus on reducing food loss on farms, taking into account the socio-economic and market factors that shape the agricultural system today.

Contrary to the belief that the loss of food on farms is a problem only in the less wealthy regions with lower levels of industrialization, ‘Sent to the trash’ evidence that high-income countries and medium in Europe, North America and Asia are those that, despite having greater mechanization on farms and represent only 37% of the world’s population contribute 58% of crop loss in the world. Meanwhile, low-income countries, with 63% of the population, have a 54% share of global post-harvest losses on farms.

Also, it is noted there that food production uses large amounts of land, water and energy. All of this contributes to the emission of greenhouse gases equivalent to almost double those caused each year by all active cars in the US and Europe.

From previous estimates, the increase in the total amount of food lost and wasted also means a increase of Emissions of greenhouse gases.

Based on this data, Pete Pearson, leader of WWF’s global initiative against food loss and waste, argues that the problem is “probably bigger than we imagined.”

‘Sent to the Trash’ reveals that food is lost on farms for a variety of reasons, including controllable factors and human decisions. Against this background, Lilly Da Gama, manager of the WWF-UK Food Loss and Waste Program, emphasizes that “providing access to technologies and training on farms is not enough; the decisions companies and governments make further down the supply chain have an impact significant on the levels of food lost or wasted on farms. “

Da Gama concludes that “to achieve a significant reduction, national governments and market players must take steps to support farmers around the world and commit to halving food waste at all stages of the supply chain. supply. Current policies are not ambitious enough. “