Ribera hides and avoids giving explanations about the ‘rate’ of light 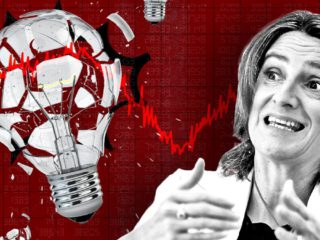 The fourth vice president and minister for the Ecological Transition, Teresa Ribera, will not attend this Thursday XXXVIII Seminar of the Association of Journalists of Economic Information (APIE) at the Magdalena Palace in Santander under the name ‘The economy of the pandemic’. The socialist was one of the ‘star’ speakers at the conference held within the summer courses of the Menéndez Pelayo International University in Santander (Cantabria).

As this newspaper has learned, the minister will not be able to travel to Santander before the celebration of the Extraordinary Council of Ministers in which, among other things, a Royal Decree Law will be approved with urgent measures to reduce the taxes applied to the supply of electricity and, with it, the electricity bill of homes, the self-employed, SMEs and the set of companies.

Specifically, the measures finalized by the Ministries for the Ecological Transition and the Demographic Challenge and Finance to contain the impact on the receipt of the upward tension in the wholesale electricity market go through reduce VAT on electricity from the current 21% to 10% and the temporary suspension of 7% on electricity production due to the increase in electricity prices due to the entry into force of the new electricity tariff divided into three time bands – peak hours, off-peak hours and peak hours- .

According to the program of the conferences organized by the APIE ‘The economy of the pandemic’, within the summer courses of the Menéndez Pelayo International University in Santander (Cantabria), Joan Groizard,
Director General of the Institute for Diversification and Saving of Energy (IDAE) will replace the minister.

A news that has been known this Wednesday despite the fact that the celebration of the extraordinary Council of Ministers was known since last Monday. Thus, Teresa Ribera will avoid giving answers to journalists’ questions about the entry into force of the new electricity bill that impacts the pockets of Spaniards who have been forced in recent weeks to set the alarm clock to iron or put the washing-machine.

The most expensive receipt in history

In fact, the electricity bill of an average user has shot up 46.5% in the first three weeks of June, compared to the same period last year, thus pointing to the most expensive bill in history, but Prices continue to climb in the context of the crisis caused by the impact of the pandemic that requires the adoption of urgent measures to avoid the impact on households and the economic activity of companies.

An escalation that the Executive wants to stop with the reduction of taxes, but it must be remembered that this measure will only be applied until the month of December and for those contracts that do not exceed 10 kilowatts of power, so «it will leave out to thousands of SMEs and Spaniards ».