Right to the angle and appearance of the scorer: Braian Romero’s two goals for River’s victory over Argentinos 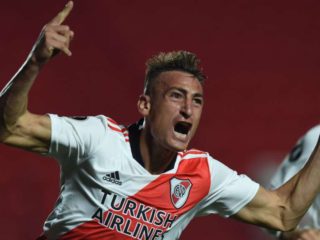 The former Defense and Justice, who had been key in the first leg by giving an assist to Matías Suárez, again brought a smile to the fans of the Millionaire.

Braian Romero made it 1-0 for River against Argentinos Juniors. (Photo: River official)

In a closed meeting, Braian romero He was in charge of showing River the way to qualify for the Copa Libertadores quarterfinals against a tough Argentinos Juniors. The former Defensa y Justicia, Marcelo Gallardo’s great bet in the passing market, scored two goals in the partial victory of Núñez’s team over El Bicho in La Paternal and slowly began to win the hearts of the Millionaire’s fans.

// Braian Romero arrives at River: he was a greengrocer, father at 16 and returned to be champion after a serious illness

The first goal came 35 minutes into the first half. In a very close match and in which there had not been too many goal situations, the 30-year-old striker fought a lost ball, won the position and took a tremendous shot from outside the area that slipped into the angle of Lucas’s goal Chaves.

Already in the second stage, he returned to the scene, but this time it was with a goal scorer. Matías Suárez won his back on the local defense and, instead of defining himself, enabled his attacking partner to score 2-0 without resistance.

It should be remembered that already in the first leg he had had a leading role by assisting Matías Suárez in the only goal from River for a match that ended tied 1 to 1.

This is the Braian Romero’s third game at River, since the weekend also added minutes in the defeat against Colón de Santa Fe for the local tournament. In this short time, he already achieved his first shouts with the Band, which serve to maintain an extraordinary statistic: throughout his career: he scored 20 goals in 31 international matches.

Romero’s arrival occurred in exchange for $ 2,500,000 for 80% of the pass, a figure that must be settled in five installments of 500,000 to be paid each semester. A round business, which is already bearing fruit: his figure was key to getting among the eight best teams in the Copa Libertadores.

The next instance, River will face Atlético Mineiro, which comes from leaving Boca on the road, with scandalous arbitration resolutions. Will the best version of Romero be seen there again?