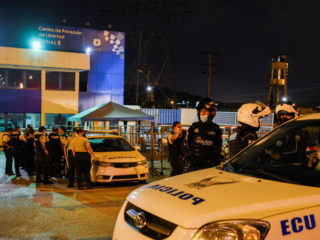 Riots registered on July 21 in two prisons in Ecuador have left at least 20 inmates killed and more than 40 wounded, including policemen, reported the National Service for Comprehensive Attention to Persons Deprived of Liberty (SNAI).

In the afternoon of this Wednesday in the Litoral Penitentiary, located in the province of Guayas, there were clashes between people deprived of liberty, leaving 8 inmates dead and three officers of the National Police injured, who are currently receiving care medical and his condition is stable.

🚨POLICE INCURSION # CmdtGralPolicía#GraITannyaVarela reports: At the moment our tactical units entered the prison in #GYE, taking control of the interior, in the event of incidents that have arisen. 👮🏻‍♂️Three injured police officers are stable in the hospital🏥 pic.twitter.com/v5IxiMvpxQ

Likewise, there was a riot in a prison in the province of Cotopaxi. So far, 10 inmates have died and around 35 injured, in addition to 6 policemen who also suffered injuries. The events also produced damage to administrative areas of the building.

🔴 WE REPOMRT In the face of riots in prisons, there are 3 police officers injured in Guayaquil and 2 in Latacunga. #PenitenciaríaDelLitoral control and order were regained. #Latacunga They are running operations. remos We will continue to report pic.twitter.com/UZJk99iPhP

The authorities assured that members of the Penitentiary Security Service together with specialized agents of the National Police have managed to regain control of the prisons.

In recent months there have been a series of violent events, riots and escape attempts in different prisons in Ecuador, for which police operations have intensified. The bloodiest riot that occurred simultaneously in several prisons in February left 79 inmates dead and multiple wounded.