Risk of food shortages grows due to climate change 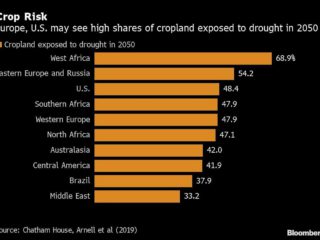 (Bloomberg) – As climate change causes temperatures to soar and droughts intensify, food supplies will struggle to keep up with the world’s growing population, according to a Chatham House report.

By 2050, staple crop yields could decline by nearly a third unless emissions are drastically reduced over the next decade. At the same time, farmers will need to grow nearly 50% more food to meet global demand, the expert group said. The Chatham House report was drafted for heads of state ahead of the United Nations’ COP26 climate summit to be held next month in Glasgow.

Food prices are already near a decade high due to disruptions in supply chains during the pandemic and extreme weather. During the summer, wheat prices rose due to crop losses in some of the largest exporters. The Chatham House report suggests that climate challenges could keep that trend intact.

“We can expect all staples to go up significantly in price,” said lead author of the report, Daniel Quiggin, in an interview. “We also expect there to be shortages in some parts of the world.”

The proportion of farmland affected by drought will increase to 32% annually, more than triple, according to the report. It also predicts a nearly 50-50 chance of a 10% or more loss of the corn crop in the top four producing countries during the 2040s.

Major crops, from wheat to soybeans to rice, are likely to see big yield drops due to drought and shorter growing periods, Quiggin said. By 2040 severe climate impacts will be “permanent” if countries do not reduce emissions, the report notes.