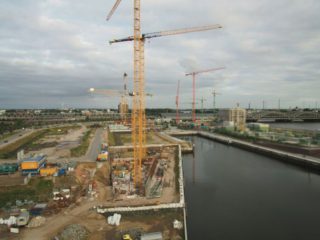 In Hamburg’s Hafencity, the foundation stone was laid on Monday for a 65-meter-high house with 18 floors that is largely made of wood. Only the base, lower floors and the stairwell of the house should be made of concrete. Completion is planned for 2023.

The first construction work on the project near the Elbe bridges has been underway since November 2020. At first it was started under the name “Wildspitze”, but was then renamed “Roots” in order to be able to market it better internationally. as it is called at NDR. The foundation is made of concrete. However, it should be significantly thinner than those in similar houses of the same size in conventional construction.

The idea behind the idea is to be able to construct such a large building with wood in a climate-neutral way. However, it is not exactly cheap: the wooden house with its 181 apartments will be around 12 percent more expensive than a building of conventional construction. If that’s enough. Because wood is a scarce and correspondingly sought-after building material on the world market. The USA and China are currently buying up huge amounts of wood from Germany at high prices. Prices that hardly anyone in Germany is willing to pay. Around 5500 km of lumber are needed for the house for the ceilings, walls and facade. A total investment of 140 million euros is estimated for the wooden house.

Hamburg’s Lord Mayor Peter Tschentscher (SPD), together with Fabian von Köppen from Garbe Immobilen-Projekte GmbH and Jörg Soehring, board member of the German Wildlife Foundation, laid the symbolic cornerstone of the building. The latter wants to occupy around 4000 square meters of the building with the German Wildlife Foundation – hence the original name “Wildspitze”.

Tschentscher is certain that the wooden house is an example of sustainable house construction in cities. “Roots” is supposed to be one of the most modern and sustainable residential and office buildings in Germany. Around 128 of the 181 apartments on around 20,600 square meters are being marketed as condominiums, 53 apartments are co-financed by the public sector. However, 80 percent of all apartments should already be taken.