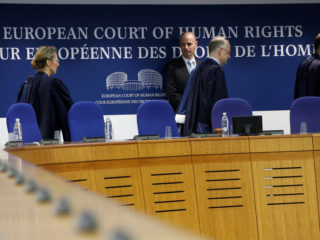 Russia has filed a complaint against Ukraine with the European Court of Human Rights, the first interstate lawsuit before this court in its history, reports the country’s Attorney General’s Office.

In its lawsuit, Russia accuses Ukraine of violating the European Convention on Human Rights. In particular, it blames the neighboring country for the death of civilians, of illegal imprisonment and cruel treatment of people in Kiev, Odessa, and the Donbass region; as well as the death of people, damage to health and destruction of property during bombardments of the adjacent Russian territory.

It also holds Kiev responsible for suppressing freedom of expression and the persecution of dissidents, as well as the discrimination of the Russian-speaking population, of the Russian language, of Russian companies and entrepreneurs.

On the other hand, it accuses Ukraine of depriving the residents of the southeast of the country of the opportunity to participate in the elections and the water blockade of Crimea, as well as launching attacks against diplomatic, consular and other Russian missions.

Finally, the indictment mentions the tragedy of flight MH17 occurred in eastern Ukraine in July 2014, due to the fact that Kiev did not close the airspace over the war zone.