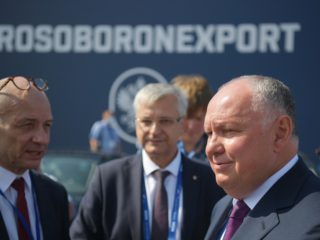 Russia hardly sells arms in dollars anymore and the proportion of these types of contracts “constantly tends to zero”. So has declared this Thursday to RIA Novosti Alexánder Mijéev, general director of Rosoboronexport, the Russian state monopoly for the sale of war material abroad.

In addition, it announced that the monopoly has signed a total of 13 arms supply contracts worth more than 1,000 million euros within the framework of the MAKS 2021 air show, which takes place these days in the province of Moscow.

“Most of the Rosoboronexport contracts are currently made in rubles or national currencies from partner countries. The dollar ratio in our contracts is constantly tending to zero. In addition, we actively use compensation mechanisms and counterpart instruments, “said Mijéev.

Russia is forced to gradually enter into more arms export contracts in national currency units due to the de-dollarization in terms of military technical cooperation. This trend is also accentuated by the threat of sanctions by the US against countries that want to import Russian weapons, under the stipulations of US law to counter adversaries through sanctions (CAATSA, for its acronym in English).

The director of Rosoboronexport also precise that foreign participants showed their interest in acquiring modifications of the MiG-35 and Su-30S fighters, Il-76MD military transport aircraft and Il-78 supply aircraft, as well as Mi-28, Ka-52 attack helicopters and a fire system. Pantsir-S1 air defense, among others.