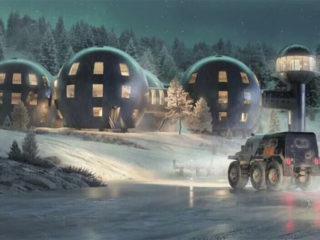 The Russian authorities have approved the construction in the north of the country of two international Arctic stations for educational and scientific purposes, the deputy prime minister and plenipotentiary representative of the Russian president in the Far East, Yuri Trútnev, confirmed this Friday before journalists. RIA Novosti.

The stations will be called Snezhinka, ‘snowflake’ in Spanish, and will be built on the territory of the Yamalia-Nenetsia autonomous district and in the Murmansk region, according to the decision of the government commission on Arctic development.

Snezhinka will be a fully autonomous complex that will operate on the basis of renewable energy sources and hydrogen, without the use of diesel. It will consist of several domed buildings that will be connected by special corridors. When viewed from above, the ensemble resembles a snowflake, which is why the project received its name.