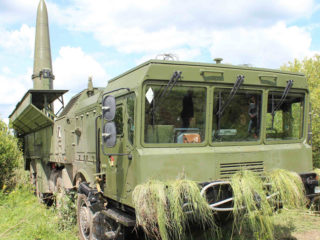 The Russian Army’s Iskander-M surface-to-surface missile systems launched a group attack with different types of projectiles on Monday during large-scale exercises Západ-2021 that are being carried out these days in 14 training fields in Russia and Belarus.

The launch was carried out from positions located 50 kilometers from the Mulino training ground, in Russia’s Nizhny Novgorod region, against the command post and other critical targets of a simulated enemy, according to a release of the Russian Defense Ministry.

“Four Iskander-M tactical-operational missile systems simultaneously participated in the group launch. The attack on the identified targets was carried out with quasi-ballistic and cruise missiles,” the text reads.

The Iskander-M system is capable of launching missile attacks of different types at ranges between 50 and 500 kilometers with a precision margin of about 10 meters from the target.

Each projectile in this medium-range system can carry both a conventional and a nuclear charge. Its range of munitions also incorporates cluster heads with different explosive charges and elements of destruction.

The Iskander-M is known to be a system whose missiles guarantee the destruction of the target. They are very difficult to locate and impossible to tear down. In the initial and final trajectory it has the ability to perform unpredictable maneuvers with surges of 20-30G.

The Západ-2021 exercises involve about 200,000 personnel and are carried out in 14 training camps in Russia and Belarus, in an area of ​​more than 2,000 square kilometers, marking the final stage of the joint exercises of the armed forces of the two countries this year.

In addition to Russian and Belarusian units, military contingents from Armenia, India, Kazakhstan, Kyrgyzstan and Mongolia participate in Západ-2021.