San Lorenzo could lose a historic footballer: “We are negotiating, but there are differences” 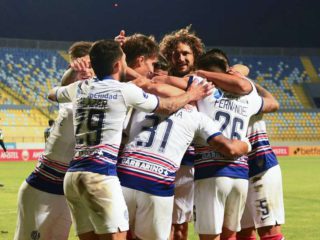 ¿San Lorenzo run out of your idol? The club president, Horacio Arreceygor, said that there are complications in the negotiations for the renewal of goalkeeper Sebastián Torrico’s contract, given that “there is a very great distance”In the economic part between what is offered by the club and what is intended by the player.

“We are in constant negotiations with Torrico, but there is a very great distance between what we offer and what he intends”Arreceygor explained in radio statements, which caused the discomfort of the fans on social networks, who created the hashtag #ConTorricoNo and #TorricoNoSeVa.

// The Copa América will be played in Brazil: it was decided by the Supreme Court of that country

The 41-year-old goalkeeper’s bond expires at the end of June and his idea would be to continue his career for at least one more season, so if he does not continue in Boedo he should look for a new institution.

The one who does have everything agreed with the Barça leadership is midfielder Néstor Ortigoza, who has already dissociated himself from Estudiantes de Río Cuarto to wear the Cyclone shirt again.

“With Ortigoza we have a plus in the locker room and with the boys, it’s something we needed, ”said Tinelli’s replacement.

On the other hand, he gave details of the general state of the club: “We are in a stage of sanitation. Two managers have already left and we plan to continue reviewing the organization chartWe are also respectful of the presidential decree that prevents layoffs ”.

“The sponsorship is over and we are working on getting a new one. We’re going to have a austerity semesterWe do not have international competitions, they will not enter dollars. We hope to be able to sell to meet the obligations ”, he added.

Regarding the choice of DT, he explained that his “weakness” is Pablo Guede, with whom contact was resumed, although those who have the best chance of sitting on the substitute bench are the Uruguayan Paolo Montero and Néstor Gorosito.

More of the pass market

Forward Nicolás Orsini is the new Boca reinforcementAfter unlocking the operation with Lanús, he will receive a sum close to $ 2,500,000 for 50 percent of his pass.

In the negotiation will not enter the fliers Gonzalo Maroni nor Agustín Obando, who were wanted by the Garnet, but they will continue in the squad directed by Miguel Russo.

The president of Lanús, Nicolas Russo, had indicated on Wednesday that the sale of Orsini to Boca was down, but this Thursday at noon – under pressure from the footballer – and after a conversation with Juan Román Riquelme, Boca raised the amount of the percentage that It will correspond to the “garnet” club and the transfer was closed.

In this way, Orsini will be the second reinforcement for the second half of the year: the first is defender Marcelo Weigandt, who returned from his loan at Gimnasia y Esgrima La Plata.