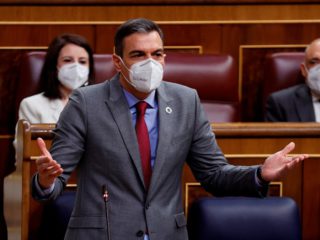 Heading into the holidays of Easter week, the government has established the perimeter closure autonomous communities, which will limit internal displacement between regions as much as possible. These restrictions do not apply on the other hand for the Spanish border with the rest of the European Union, allowing trips to or from other countries of the European Union, with a higher risk of contagion of coronavirus that Spain currently registers. According to the latest balance of the Ministry of Health, the cumulative incidence per 100,000 inhabitants in the last 14 days stands at 132.22 cases. A figure below other countries such as France (545.5), Germany (207.1) or Belgium (438.5).

The difference is even more striking when compared by region, especially with the traditional holiday destinations of foreign tourists. The Balearic Islands, for example, currently register one of the lowest incidences, with 52.02 cases per 100,000 inhabitants. The Valencian Community stands at 30.20 cases (pending update).

In full controversy over internal travel restrictions, while the arrival of tourists is allowed, the Government has announced that it will lift the restrictions in force since December – due to the rise of the British strain – to fly to Spain from the United Kingdom. The country currently registers an incidence similar to that of Spain, with 118.1 cases per 100,000 inhabitants in 14 days. However, the British Government imposes severe fines – of up to 6,000 euros – to citizens who leave the country to go on vacation.

Notice from the European Commission

The European Commission demanded this Monday to Spain “coherence” in the restrictions it applies to travel within the national territory in relation to travel to and from other countries of the European Union, while warning that the risks related to the coronavirus are similar in internal or cross-border travel.

‘The recommendation clearly states that since transmission and risk is similar for domestic and cross-border travel, Member States should ensure consistency between the measures applied to the two types of travel, “said the spokesman for Justice of the Community Executive, Christophe Wigand. The European Commission is in favor of adapting the measures according to the epidemiological situation by region, instead of imposing them on all the Member States. The Community authorities also consider that the closure of borders would not be an effective solution for border control.

The Minister of Health Carolina Darias defended in recent days the entry of tourists to Spain despite restrictions on the mobility of Spaniards.

Darias alleged that Europeans who travel to Spain are subject to the same restrictions as other citizens living in the autonomous community and insisted that only “essential trips” be made because we are “on alert” for the pandemic.

Along the same lines, the spokeswoman María Jesús Montero justified this Tuesday that Spain allows international travel at Easter, but not domestic travel, as it does so, she said, out of “reciprocity” with the rest of the European countries that “are doing the same”.

Montero acknowledged, however, that it may seem that it is not coherent, although he argued that the “rules of the game” must be respected.

Tourists from other countries will be required to have a recent PCR, maximum 72 hours. However, this control has sometimes proved insufficient. The Ministry of Health recognizes 6,472 “imported” cases since May 11, 118 in the last week.

Likewise, there is concern about the expansion of variants of the virus, with a high contagion capacity – such as the British strain – or even with the risk of “escaping the immune response” of vaccines, according to the Ministry admits.

In the latest update on the “epidemiological situation of the variants of SARS-CoV-2 of importance in public health in Spain”, Health registers, for example, 20 cases of the Brazilian mutation, highlighting that its “transmissibility and escape immune response are under study ”, pointing to a“ reduction in neutralizing antibody titers in vaccinated sera ”.

Likewise, eight outbreaks of the South African strain are reported, Health indicating the possible “reduction of effectiveness of some vaccines”.