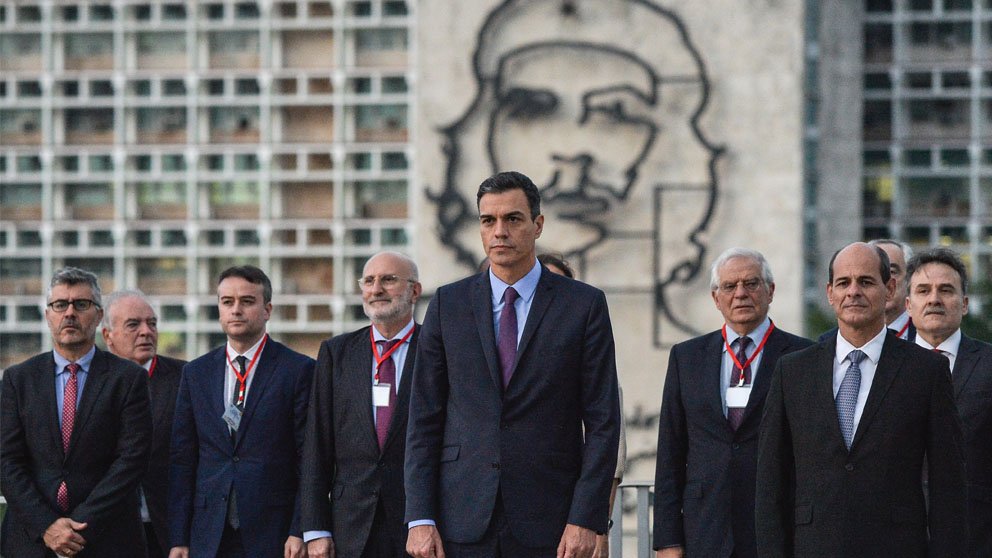 Sánchez postpones ‘sine die’ the collection of the 2,150 million that Cuba and Venezuela owe to Spain

The dictatorships of Cuba and Venezuela They do not have as a priority to pay the debt they have with Spain. The Chavista regime must 213.37 million of euros to the national coffers and the Castroite a whopping other 1,937.55 million, as revealed by the Government in a response by the Transparency Portal. In addition, the pandemic has become the perfect excuse to delay these commitments even further in recent months. All this with a Spanish Government, led by Pedro Sanchez, which is not in a hurry to collect these items either.

«As of the closing date of the last full fiscal year (December 31, 2020), Spain held debt as creditor against Cuba for the amount of 1,937.55 million euros and against Venezuela for an amount of 213.37 million euros. euros ”, is indicated in an official response from the Ministry of Economic Affairs.

In addition, it is acknowledged that it has been approved a moratorium. «On June 10, 2021, in the context of the Covid-19 crisis, it was subscribed an addendum to the multilateral agreement 2015 from Cuba. Said addendum, which was again negotiated and agreed at the multilateral level, supposes the reprogramming of certain debt maturities, without implying any write-offs “, is added in the document dated September 30.

On the contrary, with the Venezuela of Nicolás Maduro the negotiations do not even exist. «Since 2004 there has been no no type of negotiation for the relief of the debt held in front of said country, and therefore no multilateral or bilateral debt relief agreement has been signed “, develops the General Secretariat of the Treasury and International Financing, within the aforementioned ministry.

On the other hand, the Ministry does not respond to other points of the request for information for reasons of “Confidentiality”. Explain that these debts between countries are negotiated in the Paris club. However, the vast majority of the debt is with our country. “Spain is, since 1978, a member of the Paris Club (a forum in which most of the main sovereign creditors are integrated and whose main objective is to coordinate the negotiation of sovereign debt relief treatments)”, they contextualize.

«As a member of the Paris Club, Spain is committed to respect its basic principles of operation. One of these principles refers to the confidentiality of the deliberations, which also extends to the multilateral agreements reached by the members of the Club with debtor countries for the treatment of their foreign debt ”, they develop. However, in the Web This rule is not included in this entity.

In any case, OKDIARIO has been able to find more details about this moratorium in the Cuban press. In the summer quand Ricardo Cabrisas, Deputy Prime Minister of Cuba and in charge of its foreign debt, he met in France with Emmanuel Moulin, director general of the Treasury and president of the Paris Club. It was ensured that by failing to comply with the payment commitments foreseen for recent years, they have achieved more postponements.

Cuba already achieved in 2015 a juicy deal with the Paris Club, which condoned 8,500 million of dollars of a total debt of 11,000 million. The condition was to pay the remaining amount in due time and form until 2023. But the Caribbean country partially defaulted on its obligations in 2019 and completely in 2020.

The government of Miguel Diaz-Canel he is against the ropes. It has a fiscal deficit equivalent to 18% of its GDP, with foreign tourism at a low level due to the pandemic. With this circumstance, the Paris Club, where Spain is the main affected, has allowed more delays.

In 2017, the last year in which Cuba reported on its total external debt, they declared $ 17.8 billion. After the economic crisis due to the debacle of its ally and benefactor, the Nicolás Maduro regime, this figure has skyrocketed.

Another of his historical partners, Russia, has broken relationships. Despite forgive 90% of the old debt with the Soviet Union of more than 35,000 million euros they are unable to pay. The situation is so critical that the Cuban government has now tried to ask for money from Andorra.