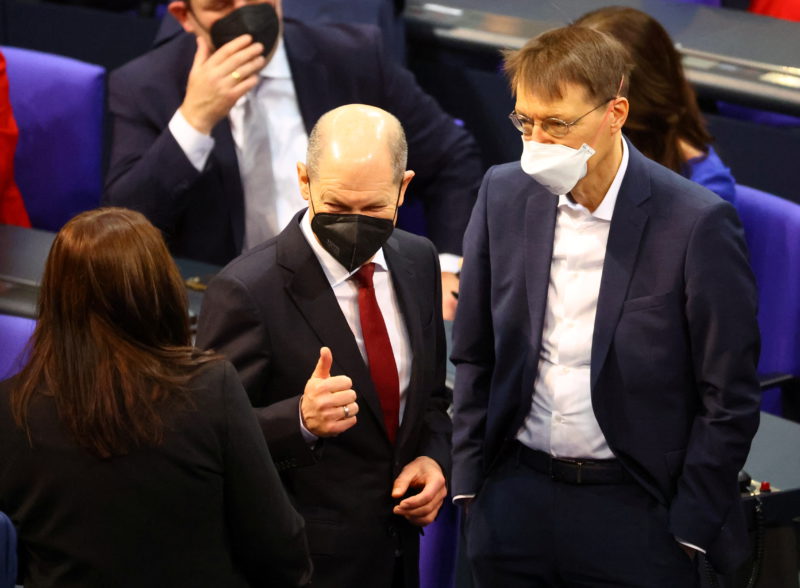 The Social Democrat Olaf Scholz became the new German Chancellor on Wednesday. At the age of 63, the former finance minister of Angela Merkel’s grand coalition takes over from the woman who has led the first European economy for 16 years. Merkel’s era ends and a political adventure begins that walks on unknown terrain.

The Social Democrat has managed in a few months to turn around an electoral race that threatened to drag him and his party into irrelevance. In spring, the SPD seemed resigned to finish in third place, behind the Christian Democrats Merkel and The Greens, who in April cherished the dream of having the first environmental chancellor. Few bet on this discreet politician, with little charisma and a tone of voice close to whispering. The Germans were convinced by his promise to continue Merkel’s legacy and his reputation as an efficient and professional manager. He played the card of becoming the Chancellor’s successor without even being from her own party. She got to photograph herself on the cover of a magazine making with her hands the famous gesture of the rhombus for which Merkel is known. And in a pun on the female version of Chancellor (chancellor) assured that he aspired to be chancellor.

Scholz will lead an unprecedented three-party coalition with Greens and Liberals that debuts during the coronavirus health crisis, the worst challenge the country has faced since World War II, in Merkel’s words. The chancellor of crises leaves without seeing the way out to the last and most devastating. It will be Scholz, the most Merkelian of the candidates to succeed her, who will have to deal with the fourth wave of the pandemic and the recovery of the economy.

During the campaign, Scholz concentrated on not making mistakes and sitting down to watch his opponents make them. Those who have dealt with him describe him as a pragmatic leader, fleeing from confrontation and seeking agreement through negotiations in which, in the end, no one feels that they have lost out. Like Merkel. Neither was she a charismatic leader or especially gifted in public speaking. No moving speeches or bombastic statements are expected from Scholz. “You cannot expect him to suddenly turn into Barack Obama or Emmanuel Macron. It will not. He is as he is, “says journalist Lars Haider, who has just published a biography of the politician, about his lack of charisma. It’s the first. The long political career of Scholz, who joined the SPD at the age of 17, has so far not interested any biographer.

Little is known of the adolescence and youth of the new chancellor. That he had long hair and that he was more on the left than now, says Haider in a meeting with foreign correspondents. Born in Osnabrück, northwest Germany, on June 14, 1958, Scholz studied law in Hamburg and specialized in labor law. He entered the Bundestag as a deputy at the age of 40, in 1998, the same year that he married his wife, Britta Ernst, also a Social Democratic activist with a long political career. The couple, who do not have children, have been moving their residence based on the positions held by one or the other. Since 2017, Ernst has been Minister of Education in the State of Brandenburg. Of Scholz’s hobbies, as with Merkel, hardly a couple of brushstrokes are known: he plays sports – runs or rows – and reads a lot, especially politics.

The Social Democrat began to gain relevance for public opinion in 2002, when he became secretary general of the SPD. In those years he had to appear very often before the cameras to give explanations about the controversial reforms of the labor market of the Social Democratic Chancellor Gerhard Schröder, who in 2005 lost the elections to Merkel. In that first government of the Chancellor’s grand coalition, Scholz held his first ministerial portfolio, Labor and Social Affairs. He then returned to Hamburg, where in 2011 he won the elections with 48.4% of the votes. He was mayor of the second German city, and a major European port, until 2018. In Merkel’s fourth and last government he emerged as a strong man of the Executive by occupying the second most important office in Berlin, that of the Minister of Finance. He replaced the Christian Democrat Wolfgang Schäuble, guarantor of budget orthodoxy and Greece’s black beast during the debt crisis.

Scholz’s popularity began to grow as the head of Hamburg. As soon as he reached the mayor’s office, he proposed to improve accessibility to housing and to facilitate the reconciliation of families. Then, as now with the coronavirus crisis, he considered that it was necessary to relax fiscal rules and allow indebtedness to finance public investment. He managed to triple the number of homes built per year in the city, of which almost a third are subsidized for families with low incomes. During his tenure, the number of nurseries increased, which became public. But from this time Scholz is left with what he considers a blur in his career: the G-20 riots. His biographer says that recently he asked him if there was something he wanted to undo, which he still dreams about at night, and the chancellor confessed that it was those days of July 2017. Haider, editor-in-chief of a Hamburg newspaper, assures that it was “His greatest political defeat.” “He did wrong everything that could be done wrong.”

The definitive boost to its public recognition came with the pandemic. Scholz knew how to react and took out the checkbook – the bazooka, he called it – in time to irrigate millions of companies and freelancers affected by the crisis. A relaxation in budgetary rigor – of which he is the biggest defender in good times – which was extended to the European context. Given the situation of some neighboring states especially hit by the virus, it boosted the historic European recovery fund.

Scholz belongs to the centrist current of the SPD. Two years ago, he ran for president of the party and lost to two contenders — Saskia Esken and Norbert Walter-Borjans — much farther to the left than he. His party sought to clearly identify with Social Democratic values ​​after several legislatures being the junior partner in the conservative-led grand coalition. However, when a candidate had to be presented for the September 26 elections, the politician whom The mirror qualified as “the embodiment of boredom” was the chosen one. Well known for his ministerial position, his sober style identified him with Merkel, the woman who had won four elections in a row. In the final stretch of the campaign, Scholz the automaton – his interventions with a small voice and his lack of gestures earned him the nickname of Scholzomat— skyrocketed in the polls. His victory, with 25.7% of the votes, and the subsequent negotiation of an unprecedented tripartite in the history of the Federal Republic have now made him the ninth chancellor.