Scientists investigate the binary origin of a large gravitational wave captured in 2019: what did the black hole ‘swallow’? 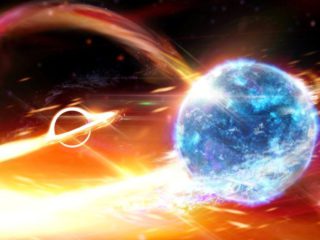 Gravitational waves, space-time disturbances recorded by orbital observatories, can come from very compact objects, as long as they are close to a black hole, which could be the case of an emission source that was observed for several seconds on August 14, 2019, suggests a team of astrophysicists from Italy.

During his investigation, the experts concluded that the origin of that gravitational wave, which had crossed approximately 790 million light years and which was designated GW190814, it was a space event consistent with the fusion of a binary system composed of a black hole with a mass 23 times that of the Sun and another little-known type of object. This second object would have about 2.6 solar masses at the time of emission, but it would not be a star engulfed by the black hole at the moment observed.

The calculations and astrophysical modeling that the team carried out point to a neutron star heavier than all those discovered so far, or to another black hole, the lightest ever observed. In the first case, you would have only several kilometers in diameter, being of special interest the internal processes that it would have undergone, due to its extraordinary weight before the merger.

According they explained members of the research team to the Phys.org website, the density of matter in its central region would have been high enough to allow the transition of a phase of ‘normal’ nuclear matter, which assumes a mixture of neutrons, protons and other particles to a new phase with predominance of ‘strange’ quarks.

This is the official name of one of the elementary particles that coexists with the u (top) and d (bottom) quarks, the most stable, most widespread in the world around us and also present in that supposed star. The described transition turns the strange quarks into “metastables” and the whole astro into a star of strange quarks, a new ‘family’ of compact bodies in the sky.

According to calculations shared by Italian astrophysicists, if a neutron star turns into a strange quark star, releases a lot of energy: an amount similar to the energy released during a supernova explosion. The signal that they perceived in 2019 on Earth would be a vestige of that powerful energy output.