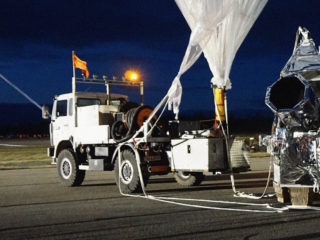 A new astronomical telescope will be launched next year into the upper atmosphere connected to a balloon the size of a football stadium, with the aim of taking images that rival those of Hubble, as announced in a release scientists responsible for the project.

The superpressure balloon-borne imaging telescope (or SuperBIT) has a 0.5 meter diameter mirror and will be raised to a 40 kilometer altitude using a helium balloon with a volume of 532,000 cubic meters.

The telescope, developed by the universities of Durham, Toronto and Princeton, in partnership with NASA and the Canadian Space Agency, will make its operational debut in April 2022, when deployed from New Zealand to circumnavigate the globe while imaging the universe.

Its final flight test, which took place in 2019, demonstrated “extraordinary pointing stability” that, according to the researchers, will allow it to obtain images as sharp as those from the Hubble space telescope. In addition, it will be able to stay in the air for months thanks to a new super-pressure balloon design from NASA, compared to regular balloons, which can only be in the air for a few days.

The budget for the construction and commissioning of the first telescope amounts to $ 5 million. In that sense, the SuperBIT costs almost 1000 times less than a similar satellite.

“The new balloon technology makes visiting space cheap, easy and environmentally friendly,” emphasizes in the statement Mohamed Shaaban, a doctoral student at the University of Toronto, adding that the SuperBIT also “can be continuously reconfigured and updated.”

The scientific goal of the 2022 flight will be to measure the properties of dark matter particles.