Seismic swarm in Spain: more than 1,500 tremors, including one of magnitude 3.9, have been recorded in the Canary Islands 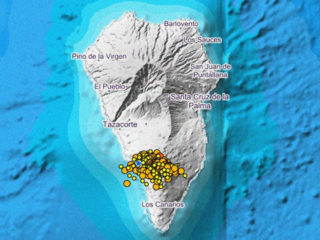 A total of 1,570 earthquakes, including one of magnitude 3.9, have been registered since last Saturday in the southern part of the island of La Palma (Canary Islands, Spain), reported this Tuesday the National Geographic Institute (IGN).

🗞️ The seismic series activity located in the south of #LaPalma 🇮🇨From the beginning of the series on the 11th until 8:00 (UTC) today, 1570 earthquakes have been detected in the area of ​​which a total of 354 have been located. More info: 👉https://t.co/CnD6NRi8ir#IGNSpainpic.twitter.com/z22nr9fRF2

The agency, which is monitoring the seismic swarm, Indian 354 of them have already been located. Likewise, he explained that the depth of the telluric movements remains between 8 and 13 kilometers.

The Canary Islands Volcanic Emergency Plan (Pevolca) active this Monday the yellow traffic light in the Cumbre Vieja natural park due to the increase in earthquakes in the area.

This level it means that the information to the population is intensified, as well as the surveillance and monitoring measures of volcanic and seismic activity. However, the current activity does not imply an increased risk for the population.

From the Volcanological Institute of the Canary Islands (Involcán) consider that this swarm represents “a significant change” in the activity of the Cumbre Vieja volcano, detailing that it is related to a magmatic intrusion process inside the island’s crust.

The Pevolca Scientific Committee reported that, since 2017, an anomalous seismic activity has been registered in the south of La Palma, which since last year has increased due to eight seismic swarms, series of earthquakes concentrated in the same place.