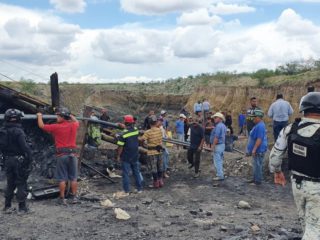 A drag mine located in the municipality of Múzquiz in the state of Coahuila de Zaragoza, located in the center of Northern Mexico, collapsed this Friday and in the incident at least seven workers would have been trapped from noon hours.

According to local media, Francisco Martínez Ávalos, Undersecretary of Civil Protection of Coahuila, confirmed the accident and commented that a rescue team had been activated in the area.

The National Guard of Mexico reported through Twitter the deployment of a security plan in the area adjacent to the mine, with the aim of allowing the rescue of workers who are trapped.

In order to assist local authorities after the collapse of a mine in Múzquiz #Coahuila, staff of the #National Guard Through the #PlanGN_A, was deployed in the area to provide security and allow the rescue of trapped workers. pic.twitter.com/Z5GFDvJpXa

According to the first reports, the accident would have been caused by a flood that affected the mine, located in the community of Las Rancherías, a place where the relatives of the miners have arrived to find out the health conditions of their relatives.