“Shared with You”: Apple stuffs received content into other apps 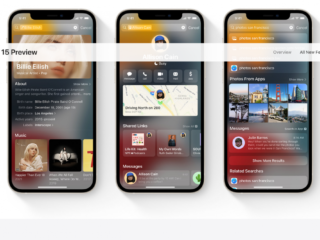 Functions implemented using machine learning and AI algorithms play a bigger role in iOS 15: Apple is expanding the capabilities of so-called on-device intelligence (ODI). With this, the device itself recognizes certain patterns and provides smart functions that would one day have been carried out in the cloud, which the group does not want for data protection reasons. A new feature is “Shared with You”, a Siri function that automatically distributes content received via iMessage to other apps.

In iOS 15, it is recognized by default when photos, links, Apple news articles, podcasts, music or Apple TV content have been shared. Instead of just leaving the content in the news app, from where it could be clicked by the users, it is automatically distributed to the various system apps. This initially applies to Photos, Safari, Apple News, the Music App, the Podcasts App and the TV App, among others. In the future, there will be new “Shared with You” areas in which users can see what has been shared with them. This “automatic appearance” of the content is “convenient”, emphasizes Apple.

The new feature is reminiscent of earlier “Siri Intelligence” options, in which, for example, contacts or appointments were automatically extracted from emails and then appeared in the corresponding apps. Users don’t always like this and it can lead to undesirable side effects; The same should also apply to “Shared with You”. Apple has therefore planned to deactivate the function if desired.

Other ODI features include the option of dictating speech on the device offline and also addressing Siri offline; the detection is carried out on the device. The system search Spotlight now works similarly to “Shared with You”: When searching for people, it spits out their last known “Find My” positions, and shows shared links and messages. The Photos app can recognize objects (such as books, plants or animals) and then display further information via Siri.