Shocking: due to the heat wave in the United Kingdom, a baby suffered burns on his feet after walking barefoot at home 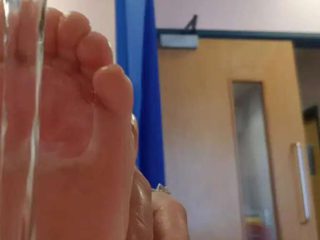 A British baby was seriously burned after walking barefoot across the kitchen floor at home as a result of the extremely high temperatures experienced by Great Britain and all of Europe. The photos of the boy’s feet were posted by his mother on Facebook and soon went viral on the internet.

Photos posted by Natasha Trevethan show the burned feet of the boy, who had walked barefoot across the kitchen tiles. The child, as reported by the newspaper The Sun, was rushed to the hospital. There he received treatment for his burns.

On her Facebook account, the woman said: “I thought about sharing our ordeal on Sunday with our poor boy to raise awareness. There was no way we would have thought that this could be the result of our kitchen floor. “

As he commented, the boy did not have the necessary reflections to get out of the hot tiles, overheated by the reflection of the sun. And he stood there crying until he was rescued by his mother. The little one is just 22 months old.

“I would hate for this to happen to someone else’s baby,” the woman said.

Britain and Europe in general are going through a heat wave with temperatures exceeding 30 degrees. Specialists warned that at that temperature the tiles exposed to the sun can reach 62 degrees.

A similar situation is observed in Canada and the United States, where record temperatures have been recorded in recent weeks that caused vast forest fires and dozens of deaths from heatstroke, especially in older adults.

Even a few days ago, the London Fire Department had to put out a fire in a house caused by sunlight refracted through a glass of a balcony. The heat ignited cardboard boxes and flames spread throughout the house. For this reason, a warning was issued to be attentive to this type of situation.

“The sun is especially strong during these summer months, but fires caused by refracted and reflected sunlight can occur year-round and are actually quite common.”, a fire department spokesman alerted.

And he added: “Our advice is to make sure to keep mirrors, glass, glass trim and other reflective items out of direct sunlight at all times. ”

// I came to operate on my daughter, I’m not on vacation: he was stranded in the US and needs to go back to work to pay a debt of us25 thousand

Meanwhile, the British Meteorological Office issued an amber extreme heat alert and warned that the high temperatures create risks to the health of the population.