Show it, incinerate it or bury it: controversy grows in Peru over the final fate of the body of the founder of Shining Path 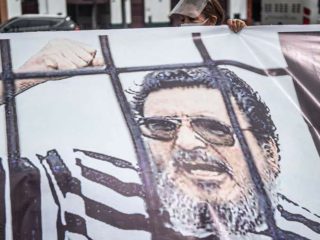 The death of Abimael Guzmán, founder and historical head of the Maoist guerrilla group Shining Path, which happened last Saturday at the age of 86, sparked a strong controversy in the Peru for the final destination that their remains will have. At the same time, doubts about his death are growing, arising from a sector of the right that demanded to see the body.

Congressmen of the Peruvian right demanded this Monday to see the body to determine if it is really the Peruvian terrorist who kept the country in suspense until his capture in 1992 due to the suspicions generated in that space by the leftist president Pedro Castillo, whom they accuse of sympathize with that guerrilla group.

Meanwhile, Guzmán’s body has remained in the morgue since Saturday, waiting for the prosecution to decide whether to hand it over to the imprisoned widow, Elena Yparraguirre, number two in the Maoist organization, for burial.

Yparraguirre, who has been serving a life sentence since 1992 in a Lima prison, authorized a trusted person to collect the body from the morgue to bury it.

Since Guzmán’s death, claims have arisen to see his body due to the suspicions of some political leaders who consider that the left-wing president Pedro Castillo sympathized with the Shining Path. However, the president flatly denies any adherence to the former Peruvian guerrilla.

“I am very sorry that the prosecution authorities have prevented me from verifying whether the body they have in the Callao Morgue is that of the terrorist Abimael Guzmán,” the congressman tweeted. Jose Cueto, a former admiral who led counterterrorism operations a decade ago.

Cueto, from the far-right Renovación Popular party, denounced that the prosecution ordered that no one enter the morgue.

In turn, Congresswoman Marta Moyano, from Fuerza Popular, the party of former presidential candidate Keiko Fujimori, added to the doubts. “We will continue in search of knowing if it really is him,” he said and suggested “cremating him” so that his followers do not worship him.

Given the doubts raised, the police had to verify his identity on Sunday. “It has been reliably confirmed, after scientific studies, that the person who died at the Callao Naval Base is the head of the Shining Path, Abimael Guzmán,” the force reported after conducting forensic examinations.

The request to cremate the body

Spokespersons for the eight parties in Congress signed a statement supporting the cremation of the body. “We believe that the body of the genocidal Abimael Guzmán should be cremated. The powers of the State are urged to defend democratic stability, in addition to condemning any action or expression that represents links with terrorism, ”the statement said.

The body of Guzmán, who according to the prosecution died of “bilateral pneumonia” in a maximum security naval prison where he had been serving a life sentence since 1992, has since been in police custody in the Callao morgue.

The Minister of Justice, Aníbal Torres, suggested on Saturday to incinerate him because it is an “extraordinary situation.”

“I have stated that this situation is particular, extraordinary, because it is a person who was a genocide; because Giving you a burial just like another citizen can lead to your followers worshiping you, tribute and thus promote violence in the country again ”, said the minister to the radio RPP.

Guzmán, a university professor of philosophy, spent his last 29 years in prison, condemned as the intellectual responsible for one of the bloodiest conflicts in Latin America, which caused 70,000 deaths, according to the Truth and Reconciliation Commission.