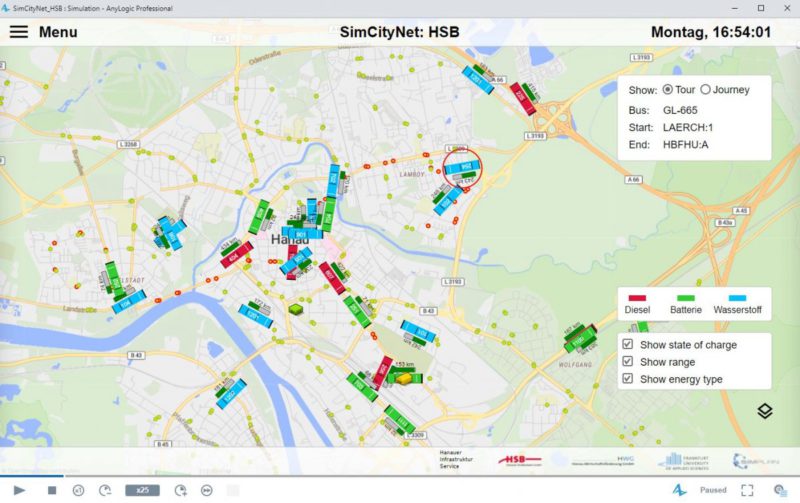 If a public transport bus fleet is converted from conventional to fuel cell drive, the operational process of the fleet operator does not change. The SimCityNet research project has determined that the ranges of the hydrogen buses and the refueling times are sufficient. However, it is expensive to buy a large number of fuel cell buses, and it is also questionable whether sufficient hydrogen can be delivered and stored at the depot.

With battery-electric buses, it looks different in public transport. In order to maintain operations, the deployment plans of the vehicles would have to be adjusted. Many existing routes could be taken over by e-buses, but the limited range means that more vehicles will be required in the long term. In the case of waste disposal companies, a mix of electric and hydrogen drives would not change the number of vehicles.

In the SimCityNet project, which has been running for two years a digital twin of the Hanau road network was created. This simulated the potential of alternative-powered vehicles in local public transport and municipal waste disposal companies. The project, funded by the city of Hanau, Hanauer Straßenbahn GmbH and Hanau Infrastruktur Service, among others, was accompanied by the Research Lab for Urban Transport (ReLUT) of the Frankfurt University of Applied Sciences. The digital twin was created in such a way that it can basically be transferred to other use cases and municipalities and can be expanded to include other aspects such as logistics.

For the simulation model, the existing processes of the tram and waste management were first analyzed and extensive data was collected. Among other things, route planning and timetables were optimized and potential savings in local emissions were identified, as the project operators explain. Based on this, target concepts were developed that describe the possible use of alternatively powered vehicles for the future and the processes implemented and validated in the traffic model.

Influential parameters such as fleet size, drive technology, charging infrastructure, charging management and weather were set for the simulation of different scenarios. As the current state of technology means that the range of battery-electric vehicles is sometimes insufficient to complete all of the bus journeys on one day without charging in the meantime, algorithms were used to determine new cycles in comparison with the selected reference range of the vehicle models.

The processes of both companies were visualized in the traffic model.In addition, evaluations and statistics on the circulations / tours and vehicles traveled were continuously recorded during the simulation calculation, for example on energy consumption, distance traveled and state of charge, in order to simulate not only the journeys, but also the charging processes . “In this way, the necessary information on dimensioning the energy supply could also be shown,” write the project operator.

The Simplan AG and Frankfurt UAS involved in the project also operate the Kombinom project together with the Hanover University of Applied Sciences. It is about simulations as decision support for the use of autonomous minibuses in rural areas.