Six ministers attend the May 1 demonstration after losing more than 600,000 jobs in one year 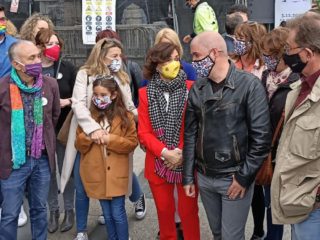 Seven ministers of the Government of PSOE and United We Can -finally it has not attended despite the fact that it was planned Reyes Maroto, from Industry- have attended together with the unions to the demonstration in Madrid for the 1st of May. Among them, the first and third vice presidents, Carmen Calvo Y Yolanda Diaz, respectively. Spain has destroyed more than 600,000 jobs in one year.

Díaz has stated that she feels “very happy” to be on the streets on Labor Day “as she has always done since she was a child.” Speaking to journalists, Díaz pointed out that “today the leading role is played by workers and union representatives.”

In a video sent by the Ministry on the occasion of May 1, Díaz has affirmed that this protest day is “an expression of solidarity” throughout the world, which unites all workers. “It has been more than a year since the pandemic took lives and jobs from us,” he recalled, after noting that this May Day is not “just another day.”

For his part, the President of the Government, Pedro Sánchez, has warned that “there will be no recovery if it does not reach the workers of our country” to whom this Saturday he will listen to their demands “with an eye on ending precariousness and inequality ‘.

The chief executive, in his Twitter account, has also assured that we have to get out of this crisis “with decent, stable and transforming jobs.” For now, and after almost three years of government, Sánchez maintains the temporary employment rates of previous governments, such as that of Mariano Rajoy, whom he harshly criticized for job insecurity.