So brutal that the referee began to cry: this was “the most masculine fight” in the history of MMA, which forever changed the lives of both rivals 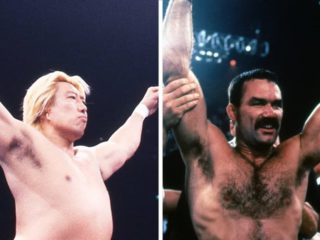 With its meteoric rise in the last decade, the UFC has attracted all eyes from fans of mixed martial arts. Thanks to the iconic fights of stars like Ronda Rousey or Conor McGregor, Dana White’s company remains the most attractive place for all fighters and has basically become synonymous with MMA, to the point that it is easy to forget for full of the existence of other companies. But it has not always been the case.

In the early 2000s, one of the key companies in mixed martial arts was the Japanese Pride. And beyond all the fighting that came to celebrate, a single fight forever guaranteed him a special place in the history of that sport: the duel between the American Don Frye and the Japanese Yoshihiro Takayama. So who were those two fighters?

Don Frye had been interested in martial arts from his youth: in college he was trained by future UFC Hall of Famer Dan Severn, and in the late 1980s he participated in Olympic wrestling and Greco-Roman wrestling events during a eliminatory for the Olympic Games. Then, between 1989 and 1990, he starred in eight boxing matches (of which he won two) and then trained in judo. In the middle of the last decade of the last century he joined the growing mixed martial arts industry and, as if that were not enough, later turned into a fighter, he became popular as a villain in New Japan Pro Wrestling (NJPW), the largest wrestling company in Japan.

But years later he returned to MMA. For 2002, Frye, nicknamed ‘Predator’, He had participated in 15 fights of that sport and had already added 14 victories. What did not let him sleep was that one defeat: the painful 12 minutes against his compatriot Mark Coleman, which ended against him with a technical knockout. “That defeat was like my first wife: I couldn’t live with her”, confessed Frye ironically in an interview, years later. He recalled having considered that his rival was going through a bad time in his career, and thought that he too would leave MMA. But it wasn’t the case: “Then Mark comes to Japan, to Pride, and wins everything. It was inspiring: I thought that if he could come back, so could I.”

Frye contacted the same company, which was simply happy to add another fighter of great fame to its roster. All ‘the Predator’ wanted was a rematch against Coleman. And after three Pride matches – all won, including the battle against veteran Ken Shamrock – they finally promised her.

With all the injuries he had suffered up to that point, Frye didn’t want to waste any more time and began training harder than ever. “After Shamrock, the only thing I wanted to do in MMA was beat Coleman”, he admitted, so he sought to confront him “before those injuries got worse,” ‘the Predator’ later recalled. “I’ve been obsessed with a couple of brunettes in my life, but none were as ugly as Coleman,” he joked.

The fight finally had a date: June 23, 2002. But there are plans that are never fulfilled. A couple of weeks before the evening, Coleman suffered a serious neck injury that left him briefly paralyzed, and it was clear that he would miss the event. The company had to replace him, and that role fell to the Japanese Yoshihiro Takayama.

‘The emperor of wrestling’

Takayama could seem quite unexpected as a replacement for Coleman – unlike the seasoned American, he had participated in just two MMA matches at the time and lost both. However, he was not an easy opponent to defeat.

In his youth, Takayama had been a rugby player, then trained in kendo before beginning his wrestling career. He debuted in 1992 with the company Union of Wrestling Forces International (UWFI), which was characterized by a style of ‘puroresu’ (as wrestling is known in Japan) that uses real blows and keys typical of martial arts. In that way, even though the outcome of the matches was predetermined (just like in wrestling, as it is known in the West), those fights seemed like a ‘real’ match. And what Yoshihiro Takayama always highlighted was in your ability to take extremely hard blows.

That was already demonstrated in his MMA debut in 2001, against the more experienced Kazuyuki Fujita, who before that confrontation had achieved six victories with only one loss, and that against Mark Coleman. Takayama acted in that match with great awareness of what he was doing and, Despite all the damage he suffered, he did not give up or show a single sign of lack of determination. Although he was defeated by strangulation, his performance was praised by both the commentators and his rival.

His second match was somewhat less impressive: Dutchman Semmy Schilt used fewer submissions and limited himself to throwing precise punches, which apparently took Takayama by surprise and led to him being knocked out.

The unforgettable “most masculine combat” in MMA history

So the ones who faced each other in June 2002 were a Frye who had turned into a ‘war machine’, preparing to exact revenge against Coleman, and a Takayama who refused to give up and returned to the ring to try his luck in MMA once again.

Before even starting the fight, the exchange of glances between the two rivals did not promise anything good. In fact, moments after the bell rang, they both did something that seemed out of a movie: each grabbing their rival with their left hands, they started exchanging meteoric right hands, in the style of hockey fights and without even trying to protect themselves. After giving themselves a moment to rest, they did the same thing again and again. The sheer brutality of the blows could be seen on Takayama’s face, which was already disfigured after the first right-hand crossing. However, the Japanese continued to perform in the ring and even unexpectedly knocked down Frye. Trying to do it again, he made a mistake that became the beginning of the end for the fight: Frye managed to block the knockdown, fell on the Japanese and kept hitting him to the head until the referee ended the fight.

Despite the loss, Takayama did not appear to be defeated, but instead approached Frye and raised his arm in respect of the winner. Then the two exchanged a few words and shook hands before leaving the ring.

In Japan, the opponents “are noble, with all the sense of bushido –’the way of the warrior’–, they have no grudges and they respect the fighter,” Frye said admiringly in a interview from last year. As for his rival, he admitted to believing that could have been the toughest Japanese fighter of all time. “God bless him, it was tough,” he confessed.

How the lives of both fighters changed after the fight

The event attracted the gazes of the entire martial arts world. What took place that day in the ring was so shocking that “Referee Yuji Shimada was crying during the match, being so happy to be a part of it”, Frye later recounted. On another occasion, ‘the Predator’ remembered also that the number of viewers who watched that battle exceeded that of a soccer World Cup match that year.

As the focus of so much media attention, that fight, which became baptized As “the most masculine fighter ever,” he put all eyes on Yoshihiro Takayama, who showed how tough wrestling athletes can be, who are often made fun of when compared to MMA fighters. . After a new loss, this time against Bob Sapp, the Japanese left mixed martial arts for several years and only returned in 2013 to face Hikaru Sato and get his first and long-awaited victory in that sport.

But what is interesting is how the fight against Frye changed his sporting career. After being defeated by Sapp, he returned to wrestling and over the next few years he starred in countless memorable fights, to become one of only two fighters in history (second was the famous Kensuke Sasaki) in winning all three major wrestling championships in Japan, all heavyweight: AJPW Triple Crown, NJPW IWGP and NOAH GHC. In fact, years later he confessed that the fight with Frye made him “feel rocky balboa”.

Meanwhile, Frye’s life was moving in the opposite direction. After the victory he decided to end his career as a wrestler, but he returned to the ring months later. As he admitted last year, he was then attracted by large amounts of money, and now he believes that he should not have. And he has every reason to regret: from then on, his by then almost perfect step through MMA started a nosedive. In addition to suffering several defeats, his health worsened due to injuries suffered over the years in the sport: he had to undergo around 20 back operations and in 2016 he spent more than two months hospitalized, most of that time in an induced coma. In addition, his personal problems had worsened and he divorced months before hospitalization. Still, that disastrous year didn’t just give him bad surprises: he was inducted into the UFC Hall of Fame.

The Takayama tragedy and reunion with Frye 17 years later

As the American recovered from all those problems, his former rival’s career came to a tragic and unexpected end. In May 2017, during a wrestling match, Yoshihiro Takayama suffered a serious spinal cord injury, which left him paralyzed from the shoulders down.

In this way, the world of ‘puroresu’ lost one of its main stars, although the nicknamed ‘Emperor of wrestling’ never lost the respect he had earned for years in the ring, particularly from his rivals. In fact, in September of the same year, Frye spread a message dedicated to his former opponent. “Takayama-san, God has given me the best rival anyone could wish for: you”, confessed the ‘Predator’, assuring that all the success of his duel was due to the Japanese fighter. By rating Takayama as the personalization of “bushido, strength and triumph”He added that he is “the first person they ask him about” in the most diverse events and “the warrior we all want to be.”

In addition, two years later they both starred in a new encounter, this time of a different nature: while Frye was in the land of the rising sun, a Japanese television program invited him to visit Takayama in the hospital. During that brief meeting, the two exchanged words of gratitude and mutual respect and highlighted how important that 2002 fight became to their careers.

At the moment, Takayama continues to receive treatment and, although in recent months news of his progress has been published on his Ameba social network account – he could even stand with the help of a support – it is unlikely that you will be able to fully recover. The company DDT, with which he had collaborated until the time of the injury, created the Takayamania project, a fundraising foundation to pay for the treatment of the legendary fighter. It should be noted that donors also include the WWE. For his part, Frye held his last fight in 2011 and remains retired to this day, while the Pride company ceased to exist in 2007. But the legendary encounter between the two continues to amaze MMA fans, including the own head of the UFC. A few years ago, Dana White called that fight “bloody incredible” – a more than fair description for “the most masculine fight” in the history of that sport.