Soccer sleeps and the fans can’t take it anymore: why haven’t the public returned to the Argentine pitches yet 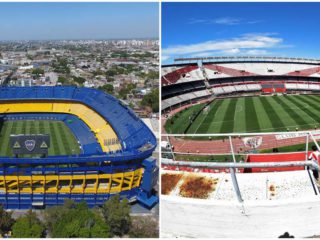 The latest of the latest. This is how Argentine soccer remained on the government’s list of priorities to enable activities. The AFA, between comfortable and fearful, He never dared to pressure and demand so that the fans can return to the courts. Today, despite favorable sanitary conditions, club members continue to pay for nothing and cannot cheer for their teams from the stands.

It has already been more than a year and a half since the last game with an audience in Argentine soccer matches. The Argentina-Bolivia pilot test at the Monumental Stadium for the Qualifiers for the Qatar 2022 World Cup was the exception amid the annoyance and anger of the football fans who see how all activities are open, even in closed areas, but football continues waiting.

Why haven’t the fans returned to the courts yet? The question does not have a single answer, but it does have a certainty: the government and the club leaders cared little about the people and just tomorrow will they get together to try to set dates and conditions to allow the members, who 18 months ago pay the quota without receiving anything in return, they can stop watching the games on TV and can do so in the stands.

“We always respect what the government indicates. It does not depend on us but it is clear that we need the public to return, at least for the members, and to be able to sell tickets and seats again. For some clubs it can be a complication because they will have to solve a system to see which members go to the field ”, a leader of the First Division told TN Sports facing the meeting on Thursday, and added: “We hope it is resolved so that by the end of the month there are already people on the fields, but we always depend on the government, and until now they wanted to wait.”

The truth is that the relationship between the national government and the AFA is not good. Claudio Tapia is not received. The last interlocutor to close the details of the Argentina-Bolivia protocol was Dr. Donato Villani. Chiqui he knows he’s signed up from Casa Rosada and he doesn’t even want to make noise. The more unnoticed it goes, the better. That played against football. From Viamonte they did not want to speed up, they did the plank. “So they are comfortable”, It is the comment that is heard the most.

The health situation improved 10 weeks ago

“Cases have been in decline for 10 weeks and the health situation is much better. I understand that now the return of the fans to the field is related to the defeat of the government in the elections because it could have happened before and it did not happen. If the protocols are complied with, a chinstrap is used permanently and people keep their distance, I don’t see a problem with the fans coming back, but in Argentina it is difficult to comply with the protocols, I don’t see why it would be different in football, “he told TN Sports Dr. Bárbara Broese, Head of Epidemiology at the Central Hospital of San Isidro.

Broese also speculated that the government wanted to wait to vaccinate more people with two doses: “In general, soccer is attended by a younger audience and they are not the ones who currently have the complete vaccination plan. I would take the opportunity to do tests on the fields to have a sample of the epidemiological situation ”.

Bars, restaurants, cinemas and theaters can receive attendees with protocols. In general, these are closed spaces, unlike football where stadiums are open and this is “beneficial because it reduces the risk of contagion”, according to Dr. Broese.

Even on tuesday It was confirmed that the Davis Cup series between Argentina and Belarus, that will be played next weekend (18 and 19) will be with the public. 70% of the capacity of the central stadium of the Buenos Aires Lawn Tennis Club will be enabled. This confirmation would be the prelude to the agreement that the government and the AFA could reach on Thursday to open the fields with a capacity of 30% (although the leaders of many clubs want to start with 50%).

In football, only those close to the clubs are allowed in, which has generated a lot of controversy due to the behavior they have on the fields and because, in addition, those who enter end up being friends or relatives of the leaders.

TN Sports made a survey on the costs of the social contributions of the clubs. The average for an active member who goes to the field is 1000 pesos per month.

“The member pays to help the club and in general they continued to do so during the pandemic. The members who can do it want to collaborate and we have to give them back the possibility of going to the field as soon as possible. Furthermore, the clubs could use it again to sell tickets and stalls, ”said Nicolás Russo, president of Lanús.

On average, each partner contributed approximately 16 thousand pesos from March 2020 to today. Everything to continue watching the games on TV despite the fact that no area of ​​the country has been at epidemiological risk for more than two months.

When did the public return in South America

In almost all the countries of South America the leagues are already played with the public. In all cases, a vaccination certificate is requested to allow entry and always with a capacity limitation. Argentina and Ecuador are the only ones running behind the rest.

Chile came back a month ago

The public returned on August 15 with a “mobility pass”, a card issued by the Government to those who have completed their vaccination scheme. The stadiums can receive between 200 and 5,000 people, depending on the epidemiological phase of the region where the game is played.

The fans returned on August 18 in an international match for Peñarol for the Copa Sudamericana. Up to 5,000 people and with a two-dose vaccination certificate.

In Paraguay, at the end of August

On the weekend of August 28, the stadiums received fans in Paraguay with a limit of 20% of the capacity and full vaccination. A registry called Hincha Seguro was opened and to go to the field you have to register. Minors are not allowed.

In Brazil since the end of July

The match between Flamengo and Defensa y Justicia played on July 21 in Brasilia meant the fans’ return to the stadiums with a 25% capacity limitation, and with the restriction of the vaccination certificate or with negative PCR. In some states the limit is 10% of capacity, and others like São Paulo have not yet allowed it.

In Peruvian soccer, it was played without an audience until the beginning of September, when 20% was allowed for the match between Peru and Venezuela for the Qualifiers. Certificate of vaccination is requested. The same restrictions apply in the First Division that is being played only in Lima.

The first matches with an audience in Ecuadorian territory were those selected for the Qualifiers, at the beginning of September, in Quito. Capacity limited to 30% and with vaccination certificate. In the League, the return of the fans has not yet been approved.

Since the beginning of last month, the public has been allowed in some cities in Colombia with a 25% capacity limitation. In Bogotá, the capital, it was authorized as of September. A fan registry was established to know who buys the tickets.

Since the beginning of July, clubs based in the city of La Paz can play with the public in their stadiums. A 25% capacity was approved, vaccination card and you can only spend two hours on the field.

The selection Red wine He was able to play in September with a 30% capacity and with a negative PCR for the fans who went to the stadium.