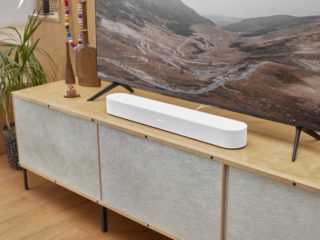 Sonos has presented a revised version of its compact Sonos Beam soundbar. The exterior of the Beam Gen2 is easy to distinguish from its predecessor. Instead of a textile covering, the housing is now made entirely of plastic. The surrounding loudspeaker grille with its fine sieve adapts to the newer speakers in the Sonos range.

The speaker setup in the new Beam has remained the same: 5 class D amplifiers drive four elliptical woofers and mid-range speakers and the centrally placed tweeters. The actual hardware update is in the more powerful processor. According to Sonos, the quad-core CPU (A-53) clocked at 1.4 GHz should bring about 40 percent more computing power than the first generation of the Sonos Beam. Sonos uses the additional power to integrate more audio formats into the system.

Instead of a fabric covering, the new beam has an openwork plastic cover.

The Beam Gen2 is said to be the second soundbar to support Dolby Atmos alongside the top model Arc. Sonos uses psychoacoustic processes to simulate the effect channels in the rear areas and above the heads of the audience through phased speaker arrays. In addition, the Beam Gen2 supports all cinema sound formats in the Dolby range such as Dolby Digital, Dolby Digital Plus and Dolby TrueHD.

Sonos also announced that this year it will bring the long-awaited support for the decoding of DTS Digital Surround via the S2 platform on Playbar, Playbase, Amp, as well as both generations of Beam and Arc. This means that owners of old devices are also promised an important update. If home cineastes use a Blu-Ray player as a player, a Sonos setup is often mute because of the DTS soundtracks that often occur on discs.

In the course of this year, Sonos plans to support Amazon Music Ultra High Definition Audio in this country. This means that titles should be playable in lossless audio with up to 24 bit / 48 kHz on the Beam Gen2. In addition, the device should be able to play the Dolby Atmos Music format, which promises an immersive audio experience. Dolby Atmos Music is currently available from streaming provider Tidal. In the conversation, Sonos has not yet been able to provide any information about the support of the 3D audio content announced by Apple.