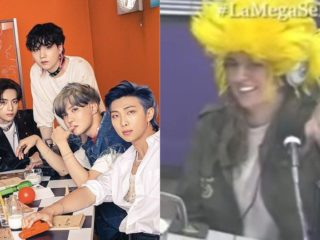 Great commotion has been generated in social networks after the hosts of the program “El mañanero” of radio ‘La Mega’ (Colombia) referred to the members of BTS as “los chinitos” and pointed out that the success of the South Korean group has been thanks to the power of money.

“Those ‘Chinese’ go very fast, it makes me very commercial […] is that they put a lot of money in it, they make them put them at the top of the lists […] the Grammys put them with the whole ticket, but they have not managed to win anything “, were several of the expressions that were heard in the live broadcast of the radio space.

These comments were the target of harsh criticism by ARMY through social networks and with the hashtag #LaMegaCancelados o #LaMegaDisculpa they denounced this public episode.

Faced with this situation and being exposed in the cyber world, the radio director, Alejandro Villalobos, turned to his Twitter account to refer to it, but his message was not to the liking of BTS fans.

“I don’t like BTS, it’s a marketing product and that’s it. Ahhh but I’m not old enough to like it “Villalobos said.

This controversy of ‘La Mega’ reached the South Korean country, the country where BTS was formed, and a news outlet described the fact as a case of xenophobia.

The South Korean journalist highlighted that while our national anthem is playing, one of them is wearing a T-shirt with the Rising Sun flag and laughing. This is important for the inhabitants of South Korea, because in this country and in others on the Asian continent this flag is an offense and represents one of the darkest times for its inhabitants.

This has not been the only media in the Asian continent that has reacted to the comments of ‘La Mega’, in networks such as YTN and MBC also gave the news and described the comments made by Colombian journalists as racist, derogatory and controversial.