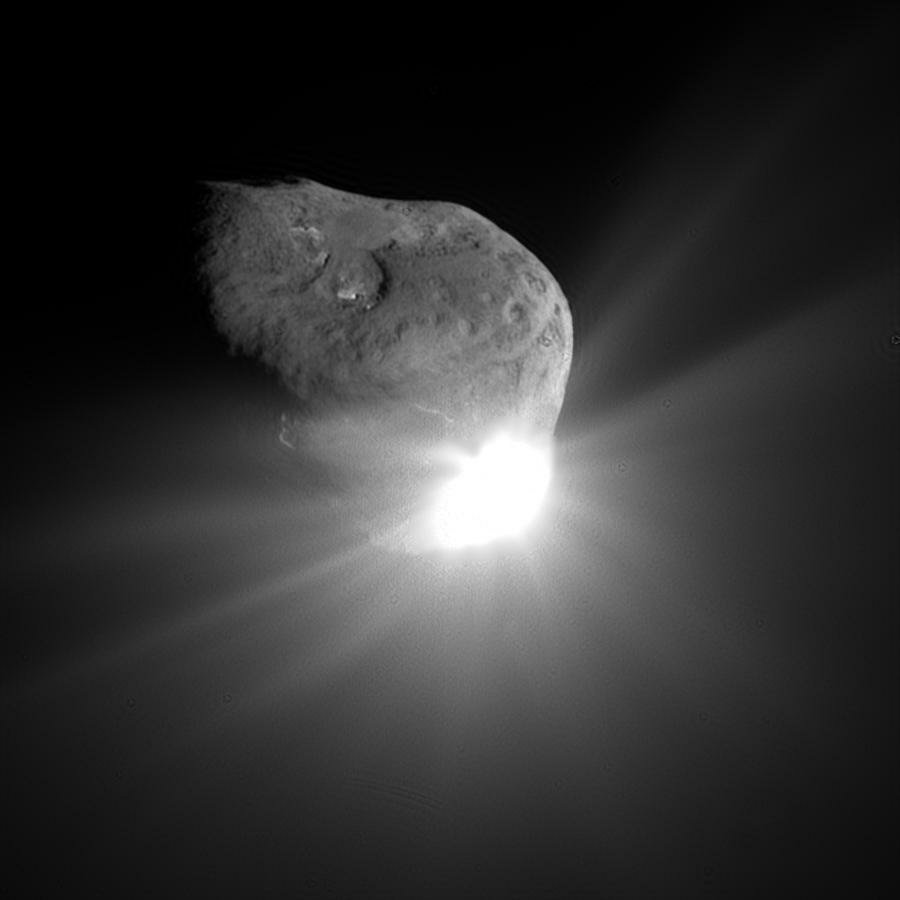 In the interpersonal area, it would be rather unusual behavior to want to get to know someone better by shooting at them. In planetary science, on the other hand, it is practiced again and again: projectiles are fired at comets and asteroids in order to be able to spectroscopically examine the mass that was thrown up during the impact or to be able to capture it for transport back to Earth. But are the samples obtained in this way still original material or have they been chemically altered by the collision?

At the beginning of July 2005, the American probe Deep Impact fired an impactor weighing 372 kg at the comet Temple 1, which hit the comet at a relative speed of 10.3 km / s. The resulting flash of explosion is estimated at a temperature of 3500 degrees Celsius. Some chemical processes are likely to have taken place. In laboratory experiments, researchers try to understand what exactly happens with such impacts at high speed. When the Europlanet Science Congress (EPSC) two teams present such studies.

Light gas cannons in the laboratory

However, it is no small matter to generate such high speeds in the laboratory. The explosion gases from a conventional nitrocellulose propellant charge only spread at speeds of two to three kilometers per second. With the help of light gas cannons, however, the momentum of these relatively heavy gases can be transferred to a lighter gas, ideally hydrogen, which is then accelerated to higher speeds. Similar to rockets, such cannons also work with several stages. In this way, speeds of more than 11 km / s can be achieved – in this extremely high range, however, at the cost of severe damage to the light gas cannon.

Vassilia Spathis (University of Kent) and James S. New (University of California Berkeley) have proven themselves in using the University of Kent two-stage light gas cannon therefore content with a speed of 6.39 km / s. At this rate they fired a sample of the polycyclic aromatic hydrocarbon pyrene at an aluminum foil, which in turn was attached to an aluminum plate.

The spectroscopic analysis showed that the pyrene at the edge of the resulting crater had been converted into graphite, i.e. pure carbon. In the center of the crater there were also substances that Spathis and New have not yet been able to determine more precisely. The researchers suspect that it could be fragments of the pyrene molecules. However, it is also possible that a metal-organic complex has formed or that the aluminum as a catalyst has caused the pyrene to be converted into benzene.

Further research should clarify this question. But it is already clear, says Spathis, that the greatest care must be taken when collecting samples from other celestial bodies. In particular when searching for organic molecules and possible traces of life, these could otherwise be modified and destroyed when the sample is taken.

Meteorite Strikes and the Creation of Life

Now projectiles fired by humans are not the only thing that hits other celestial bodies at high speed. Rather, these are constantly hit by smaller or larger chunks that are buzzing through space. A lot gets broken in the process, but often new things may also arise – sometimes even life. Surendra Vikram Singh from the Indian Physical Research Laboratory and his research team also used the two-stage light gas cannon in Kent to understand the importance of such meteorite impacts for the development and spread of life in space.

According to Singh, experiments by other research groups have shown how more complex molecules such as amino acids or components of nucleic acids can be formed from simple molecules such as ammonia, water, carbon dioxide and methanol during impacts at high speeds. With his experiments he wanted to find out how amino acids behave under such conditions, and to do this, he shot at amino acids (glycine and glutamine) dissolved in water ice at temperatures of 140 K with a 1mm steel ball accelerated to 5 km / s.

Examination of the ejected material with an electron microscope showed complex, ramified structures that had formed during the impact. Chemical analysis by liquid chromatography with mass spectrometry coupling showed that the amino acids had linked to form peptide chains with up to twelve links. The study therefore underlines the importance of meteorite impacts for the development and spread of life in space, emphasizes Singh.