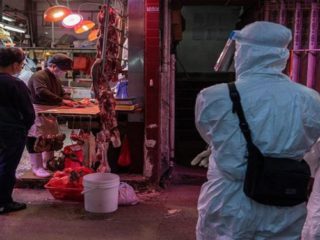 China’s version that places the origin of the coronavirus in the transmission of the disease from bats to humans loses weight. More and more nations doubt this hypothesis. For this reason, Spain will also investigate whether the virus left a laboratory accidentally or intentionally.

Spain bows to the countries that activated their inquiries to answer this question about the coronavirus, because the theory related to the alleged human intervention in the creation of the virus had already been raised previously.

However, now it takes more consistency. Two weeks ago, the president of the United States, Joe Biden, ordered an investigation to the intelligence agencies of the country to show whether or not the origin of the coronavirus came from a virology laboratory that was doing experiments with bats in the territory of Wuhan.

With this new order, Biden retracted, after ending the investigation initiated by his predecessor Donald Trump, which was also related to the origin of the coronavirus. During this Republican administration, the then Secretary of State, Mike Pompeo, gave rise to several explorations to determine if the role of China in the emergence and spread of the virus was greater than is believed.

With regard to Spain, the National Intelligence Center (CNI) will be the entity in charge of analyzing the probabilities of this hypothesis. Similarly, the secret services of the United States, United Kingdom, New Zealand, Australia and Canada are already making progress on these studies in an intelligence community called Five Eyes. Germany and France also collaborate there.

The findings from Spain will be condensed into a report. This was requested by the Pedro Sánchez government, reveals OkDiary. In turn, the focus will be on examining the role of the Wuhan Institute of Virology. This is a biological level 4 laboratory – where more dangerous pathogens are handled – located near the Wuhan market, supposedly the point where the deadliest pandemic of the last century originated.

“La Moncloa does not want to be left behind by the theory of the Chinese laboratory,” says the Spanish media.

In the case of Spain, the bulk of the analysis will be based on data and conclusions that transcend other countries that have already worked on the ground. A “technical panel” of experts in virology and epidemiology, as well as several professors will evaluate the content to be selected.

How long will it take to produce a result? It is uncertain. The Department of National Security will collaborate but “there is no established deadline for delivery” highlights the medium, because “Spain has little infrastructure in China. There are hardly any personnel for field work and it is a very particular place. It is not easy for Spanish intelligence to move there.

The United States does have deadlines. The Joe Biden government expects the intelligence agencies in 90 days to come up with a definitive version of its most likely origin.

The pressure on Beijing is felt. The Xi Jinping regime tries to deflect investigations with alternative origin theories. Their arguments range from transmission through frozen food imports to a launch of US biological facilities.

And furthermore, the Chinese communist regime seeks to recover its damaged international image with more propaganda about its system.

Until now, one of the first inputs from Spain is the alert from the head of the CNI antenna in China, Beatriz Méndez de Vigo, who sent a note to Madrid in mid-January 2020 in which she alerted about a group of doctors of the Wuhan Central Hospital, led by Dr. Ai Fen, who warned of the seriousness of the epidemiological situation.

Méndez de Vigo, which was number two of the Spanish secret services from 2012 to 2017, as well as destined for Beijing since June 2017, reported the high level of alarm that the virus was generating within the Chinese Government.

His notice preceded the declaration of “public health risk of international concern” decreed by the World Health Organization (WHO) on January 30, 2020. It means that a couple of weeks before the world began to show the magnitude of infections La Moncloa handled “privileged information from Wuhan.”

In the CNI they question Sánchez who “was warned months in advance of what was coming.”

But that’s not the only controversy. The Spanish Ministry of Health is in tune with what the WHO alluded to at the time, which at the time considered “extremely unlikely” that the virus came out of the Chinese laboratory. This is collected in an official document that updates every several months and is briefly titled Transmission of SARS-CoV-2. With the endorsement of the Center for the Coordination of Health Alerts and Emergencies directed by Fernando Simón.

Health indicates in this report the fact that the Wuhan virology laboratory suspected of the leak was working on the sequencing of the RaTG13 coronavirus strain. This was a pathogen that was discovered among bats that inhabit a cave in Yunnan (China). The finding was in 2013 and the virus shares its structure 96.2% with the SARs-CoV-2 that produces COVID-19.

As reported by Health, this Chinese research institute in Wuhan moved to its new location in December 2019. Now it is close to the market where the first outbreak was decreed. These “movements can be detrimental to the operations of any laboratory.”

While the conclusions about the origin of the coronavirus are being generated, the number of cases rises 168 million and deaths already reach 3.5 million. Figures that continue to increase progressively and without having a short-term brake, apparently.