Spain divided by the vaccination of the soccer team: a national asset or a privileged group? 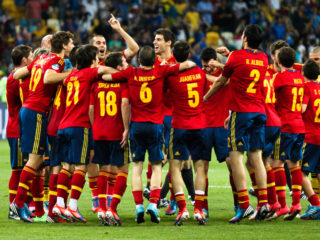 The vaccination of the players of the Spanish soccer team that are going to participate in the Eurocup, which will be held from this month, keeps Spanish society divided, including government partners. This Friday, personnel from the Ministry of Defense will travel to the Ciudad del Fútbol de Las Rozas, in Madrid, to begin to administer the doses to the players and the coaching staff.

The immunization of this group of footballers, plus the rest of the squad, a total of about fifty people, has generated controversy in the country. Supporters of this measure argue that players practice a extreme sport (regarding the contagion by coronavirus), without using masks, and that they are the image of the country abroad.

On the other side of the scale, detractors argue that they cannot be treated as privileged people and that it is unethical to vaccinate a group of people healthy and under 40 years, when there are still risk groups in the country without vaccination, as is the case of people with chronic diseases, among others.

Within the government, headed by President Pedro Sánchez, there have also been discrepancies. His partner, Unidas Podemos (UP), has shown his disagreement with the administration of the vaccine to the national team players.

In addition, they have not been the only ones in the Congress of Deputies. The Basque Nationalist Party (PNV) and Esquerra Republicana de Catalunya (ERC), parliamentary supporters of the Executive, as well as other minority progressive groups, have also expressed their dissatisfaction with the measure.

💉🇪🇸 NATIONAL DEBATE! 💣 The SELECTION VACCINE reaches POLITICS. (🎥 @DebatAlRojoVivo) 🔥 Our politicians give their opinion at 15:10 in #JUGONES@laSextaTV. pic.twitter.com/kaGeazLIaB

“They were at the forefront of the pandemic and are relegated by eleven men who tap the ball. It passes in front of these professionals and it is bad news that goes against the common sense of this country “, has lamented Aina Vidal, deputy of En Comú Podem, in reference to essential employees, such as delivery men or supermarket workers.

On the contrary, the Popular Party (PP), the far-right Vox, Ciudadanos, Más País and the Democratic Party of Catalonia (PDeCat) have aligned themselves with the government’s position, although they have reproached the lack of foresight.

No time to immunize?

That lack of foresight is now also at the center of the debate. The Spanish team will play its first game next Monday, June 14, so there is less than a week left.

Immunization is not immediate once the drug is administered. If it is a two-dose vaccine, it is estimated that this is not reached until two weeks after completing the guideline. In the case of Janssen, the only single dose available in the country, it also reaches its maximum protection after two weeks of its inoculation, although it is lower than that of other drugs, reaching 67% (85% in the case of severe covid and 100% in cases of mortality).

Therefore, at no time would the players be protected at the beginning of the European championship, although they could be protected in the middle or at the end of the tournament, depending on the drug used.

Since the massive vaccination campaign began, which started at the end of December, the Spanish population has not been able to choose the drug with which it was going to be inoculated. This has been established by the health authorities at all times, taking into account the availability of each one of the vaccines and the characteristics of each group.

In the case of the national team players, the Ministry of Health has finally given the go-ahead to administer the vaccination of Pfizer, who is scheduled for the second dose three weeks after receiving the first. However, the Spanish Football Federation (RFEF) intends that both players and coaching staff are supplied with the drug of Janssen, according has advanced Information.

The problem is that this last serum not recommended for people under the age of 40 Furthermore, it is preferentially targeting hard-to-locate citizens, such as homeless people, temporary workers, people with serious mental illnesses or migrants in an irregular situation, all of them vulnerable groups.

Will it affect performance?

With time running against, players need to be vaccinated as soon as possible, not just to achieve maximum protection, but to separate the possible adverse side effects as much as possible of the matches they must play, so that they do not affect their performance.

🗣️ @ LUISENRIQUE21: “In the event that an agreement is reached, I would like them to be vaccinated as soon as possible” .➡️ “It would bother me not to be able to count on a player due to a reaction to the vaccination, but, as of today, we have no confirmation of the vaccine “.# We are Spain#EURO2020pic.twitter.com/sdOnYxmO8T

This morning, the national coach, Luis Enrique, expressed his doubts at a press conference: “In the event that an agreement is reached, I would like them to be vaccinated as soon as possible. It would bother me a lot if there were symptoms, but we contemplated it, clear. To this day we do not have confirmation that we are going to be vaccinated“, has held.

In the event that athletes had to play with side effects (fever, muscle pain or malaise, the most common), the Federation prefers that it be sooner, as in the first game that they will play next Monday against Sweden in the group stage: an opponent not very complicated and a possible puncture that could still be overcome.